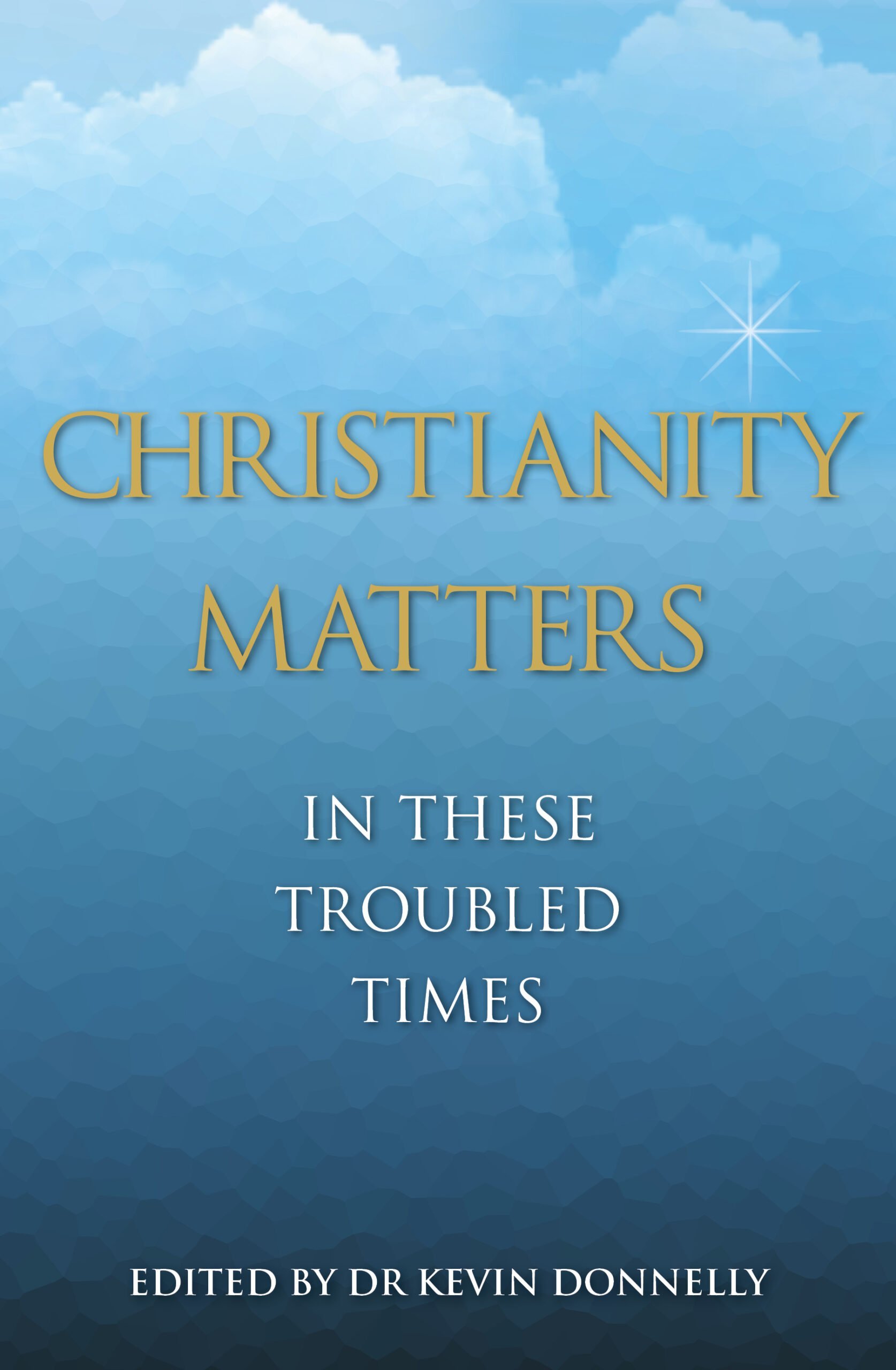 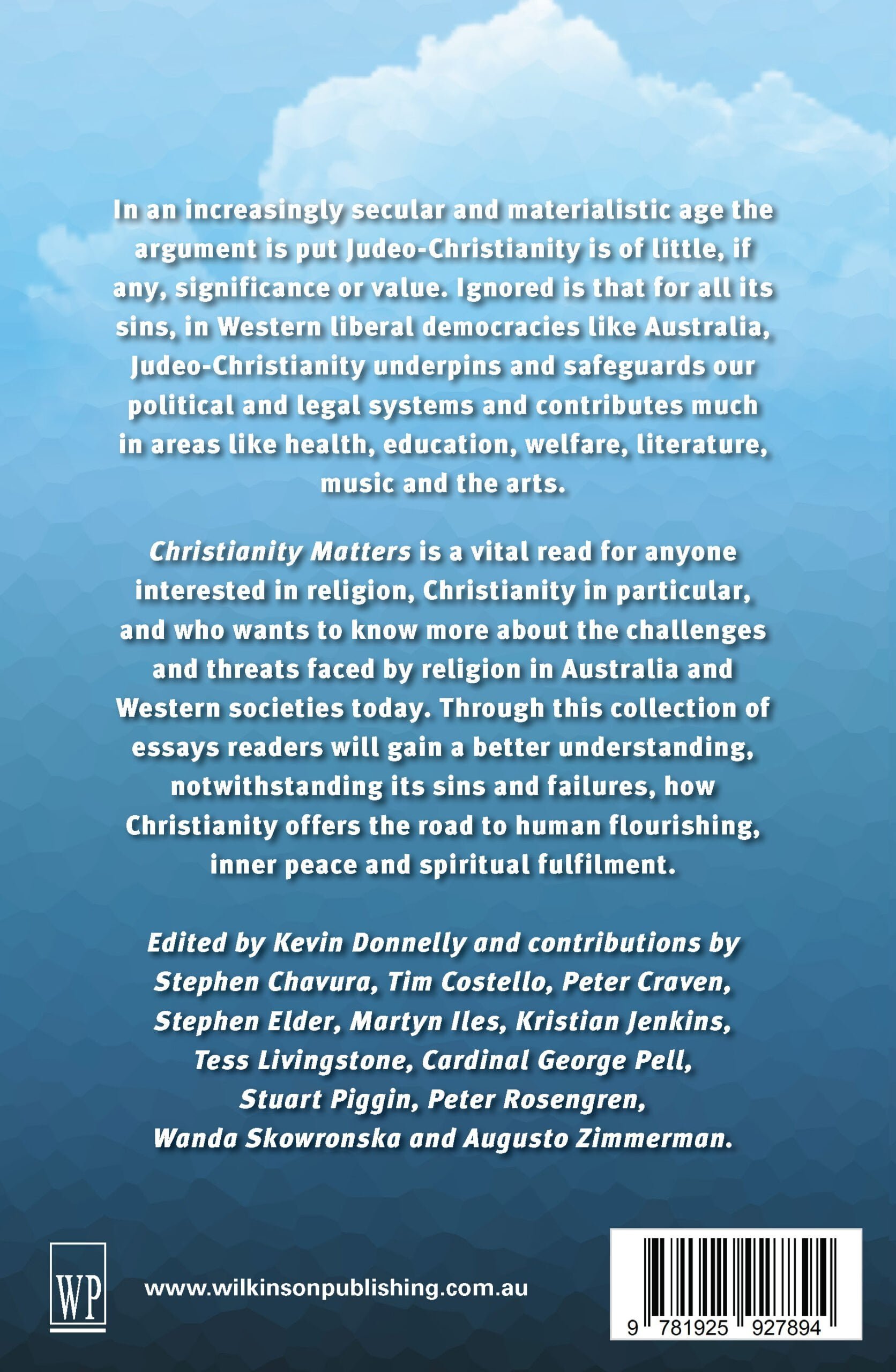 Christianity Matters In These Troubled Times

“If Christianity goes, the whole of our culture goes. To our Christian heritage we owe many things beside religious faith. Through it we trace the evolution of our arts, through it with have our conception of Roman Law which has done so much to shape the Western world, through it we have conceptions of public and private morality….The Western world has a unity in this heritage, in Christianity and in the ancient civilisations of Greece, Rome and Israel, from which, owing to two thousand years of Christianity, we trace our descent.” T.S Eliot (x)

Christianity Matters in These Troubled Times offers eleven substantial essays by some of Australia’s most well-known Christian academics, churchmen, journalists, and commentators. Since the 1960s Christianity’s social influence, including popular belief in its key doctrines, has been declining throughout the West. This decline should be of concern to anyone who values liberty, democracy, civic awareness, education, and concern for the weak and downtrodden. Why, because the modern expression of these ideals grew out of a cultural soil rich in Christian belief and practice. And if the flower is plucked from the soil, it must wither and die. But as this volume shows, its continued decline is not inevitable. There is a way forward.

The Christian Heritage of the West

Cardinal George Pell reminds us that, according to Russian refugee and Nobel Laureate Aleksandr Solzhenitsyn, the disasters of the twentieth century, particularly in Russian history, occurred because “men have forgotten God”, and, indeed, this was the “principal trait of the 20th century.” Pell is under no illusions that ours is an increasingly post-Christian culture, with only 52% of Australians identifying with Christianity. And yet Pell reminds us that our Christian heritage is a repository of art, philosophy, literature, music, and meditation of infinite worth. Pell suggests that ours may be a culture like the prodigal son of Jesus’ famous parable (Luke 15:11-32): wayward but always welcome to return home once it realises the bitter fruits of its detour from God.

In our age of self-loathing and self-flagellation, it is well to reflect objectively on our past. Dr Stuart Piggin, Australia’s preeminent historian of Christianity, shows how it was out of Christianity that healing could be initiated within Indigenous communities affected and displaced by colonialism. Piggin outlines how clergy and missionaries educated and protected Indigenous Australians during a period of settler expansion and violence. As well as opening schools and Sunday schools to educate the white children, missionaries educated Indigenous children in spite of prevailing opinion that they could not or should not be educated.

Also reflecting on Christianity’s historical impact, Professor Augusto Zimmermann, shows the immense contribution Christianity has made to the Western tradition of limited government and civil disobedience. According to Zimmermann, Christianity developed the notion of a natural law, a law above kings and empires, which was used to hold tyrants accountable. Much of this was captured in the Magna Carta, the founding document of British liberty and so influential in shaping the course of British politics that led to Western liberal democracy. This Christian natural law would also be used by William Wilberforce in the eighteenth and nineteenth centuries to fight slavery, and was restated by the Rev. Dr. Martin Luther King against segregation. “It appears”, says Zimmermann, that “in the long run no effective protection to our inalienable rights can be sustained without the higher standards of justice and morality that were brought into the texture of Western democracies by Christianity.”

Continuing the theme of the contribution of Christianity to our culture, Peter Craven, one of Australia’s best-known literary critics, takes the reader on a truly exhilarating tour of modern literature via John Henry Newman, James Joyce, Leo Tolstoy, T. S. Eliot, Fyodor Dostoyevsky, Gerard Manly Hopkins, Thomas Kenneally, and Les Murray, among others, to demonstrate that a proper understanding and deep appreciation of modern Western literature is simply impossible without a prior understanding of the Bible and Christian traditions. Australian historian and commentator, Dr. Stephen Chavura, traces the Christian history of the universities, showing how they have become increasingly relativistic and ideological. There is a way forward, says Chavura, but it requires cultural pioneers anchored to the ideals of the universities at their height.

The Resources of Christianity for Cultural Renewal

Stephen Elder, former Member of the Parliament of Victoria and education reformer, shows the immense potential of the Catholic schools in the project of cultural renewal. Australia is in a unique situation in that a massive 20% of Australian school students attend Catholic schools, with a further c.15% attending other kinds of denominational/independent schools. Elder takes the reader on a tour through “the long march through the institutions”, or the infiltration of the universities with critical theory and cultural Marxism coming from the Frankfurt school, now manifesting as wokeness. Wokeness, with its obsession with power, struggle, and overthrowing all existing Christian traditions and norms is, according to Elder, “incompatible” with Christian education. And so the task preserving true Christian education must involve preventing the wokeness emanating from the universities taking over the denominational schools.

Tim Costello, former CEO of World Vision, outlines the immense resources within Christianity for the amelioration of injustice and suffering. “Faith”, says Costello, “has been the fuel that has fed the passionate quest for social justice and animated many movements for social reform.” As historian Geoffrey Blainey said, the Christian churches did “more than any other institution, public or private, to civilize Australians.” Thus it is not surprising that 23 of 25 of Australia’s top charities have Christian foundations. Costello shows the immense contribution of Christianity in Australia towards helping the poor and homeless, and that this has led the majority of Australians, according to a 2018 study, to consider Christians to be kind and caring.

In an important essay, Martyn Iles, lawyer and Managing Director of the Australian Christian Lobby, takes the reader through a tour of the overwhelming evidence that religious faith, Christian faith especially, contributes to social and individual wellbeing. Iles conclusively shows by citing many studies that Christian belief is good for physical health, mental health, the wellbeing of the family, and the vitality of civil society. Christian citizenship works towards the common good and is thus crucial to the future wellbeing of society. The great accusation against Christianity nowadays is less that it is irrational or unscientific than that it is harmful. If the alleged harmfulness of Christianity will be the major weapon wielded against its free exercise, then Christian citizenship with its undeniably salutary effects on society is made imperative as a way of showing that Christianity, far from being harmful, is actually necessary for the future wellbeing of society.

Despite, or perhaps because of, Christianity’s salutary influence on society and the world at large, it is under attack in many parts of the world, including the apparently tolerant West, according to psychologist and author, Dr. Wanda Skowronska. Studies repeatedly show that “the most intensely persecuted believers in the world today are Christians”. The attacks in the West originate in the anti-Christian ideologies that emerged from the French Revolution, itself a failed attempt to completely extirpate Catholicism from France. Skowronska shows how Marxists co-opted the discipline of psychology to wage war against Christianity and its teachings on gender and sexuality, now manifesting in the transgender movement.

No one denies the sins committed by those calling themselves Christians over the centuries, and much stress is laid by critics of the Catholic Church of its historical intolerance of other religions and forms of Christianity. But, as Peter Rosengren argues, all the accusations thrown at the church, and one might add Christianity in general, do nothing to mitigate either Christianity’s massive contribution to the best of our culture or the fact that the West is slipping into a moral relativism and existential crisis that Christian churches are best suited to speak into. The cultural Marxism that has overtaken so much of our thinking will prove to be disastrous to our already fragile social cohesion. Journalist Tess Livingstone notes some of the challenges ahead, particularly the imperative to strengthen Christian schools against secularist and woke ideology, and the ever-looming culture of death, with its obsession with euthanasia and abortion.

Christianity Matters offers numerous ways forward in terms of defending Christianity’s contribution to our culture as well as ways to fight back against secularist attacks on religious freedom. Readers will find in this book much information regarding Christianity and history by Australia’s preeminent experts on the topic. But they will also find practical suggestions to move forward.

A major practical task is to equip Christian schools against woke and secularist ideologies that corrupt students in the short term and the culture in the long term. Encouraging the establishment of alternative Christian tertiary institutions will also be important to prevent the complete domination of the universities over the minds of future Australians. Understanding and mastering accusations of harmfulness against Christianity will also be crucial in the battle ahead.

Christianity Matters is not just a book from which much history and reflection will be gleaned, but it is also an important practical contribution to the task of cultural renewal that lies before us.