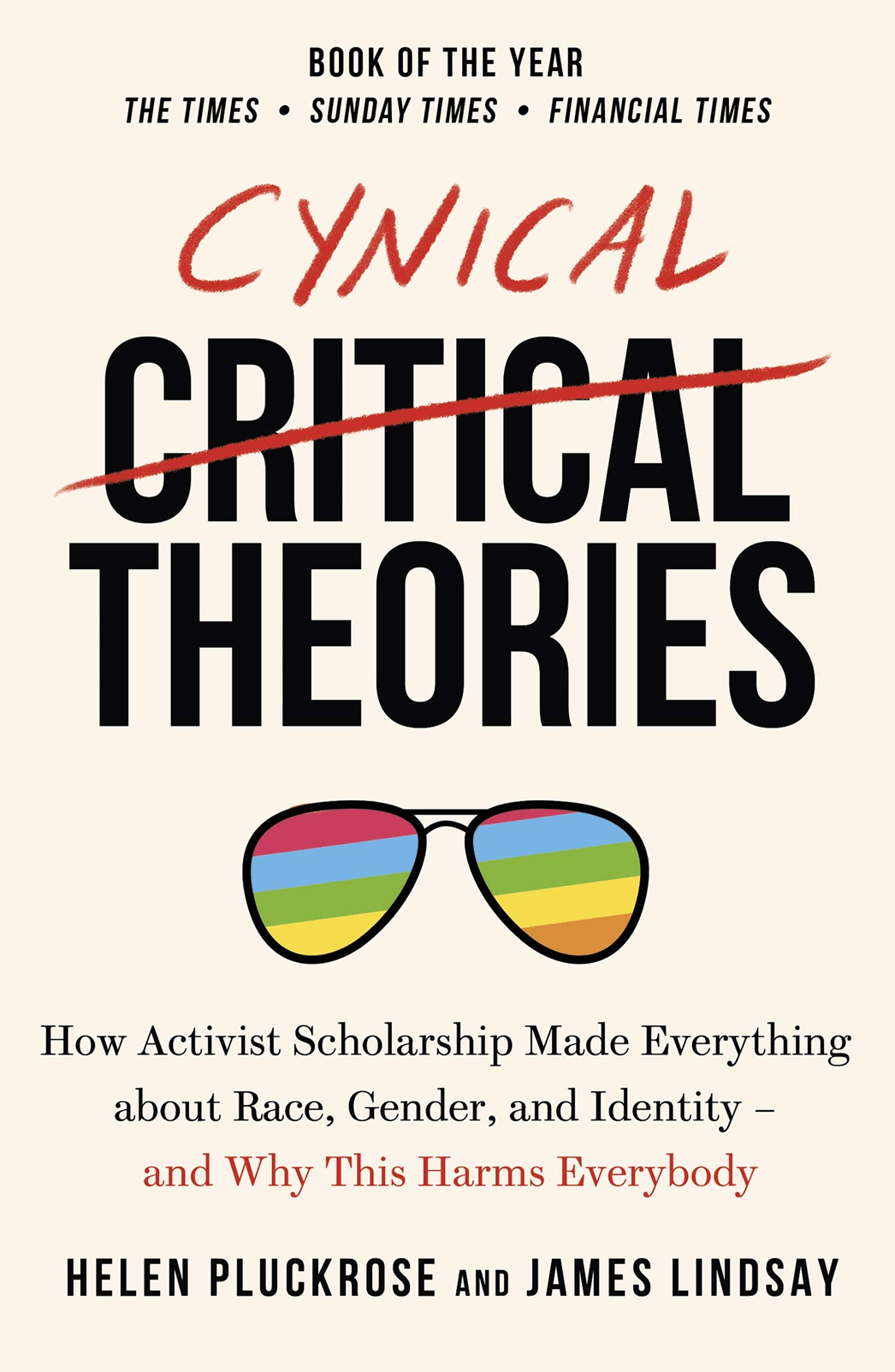 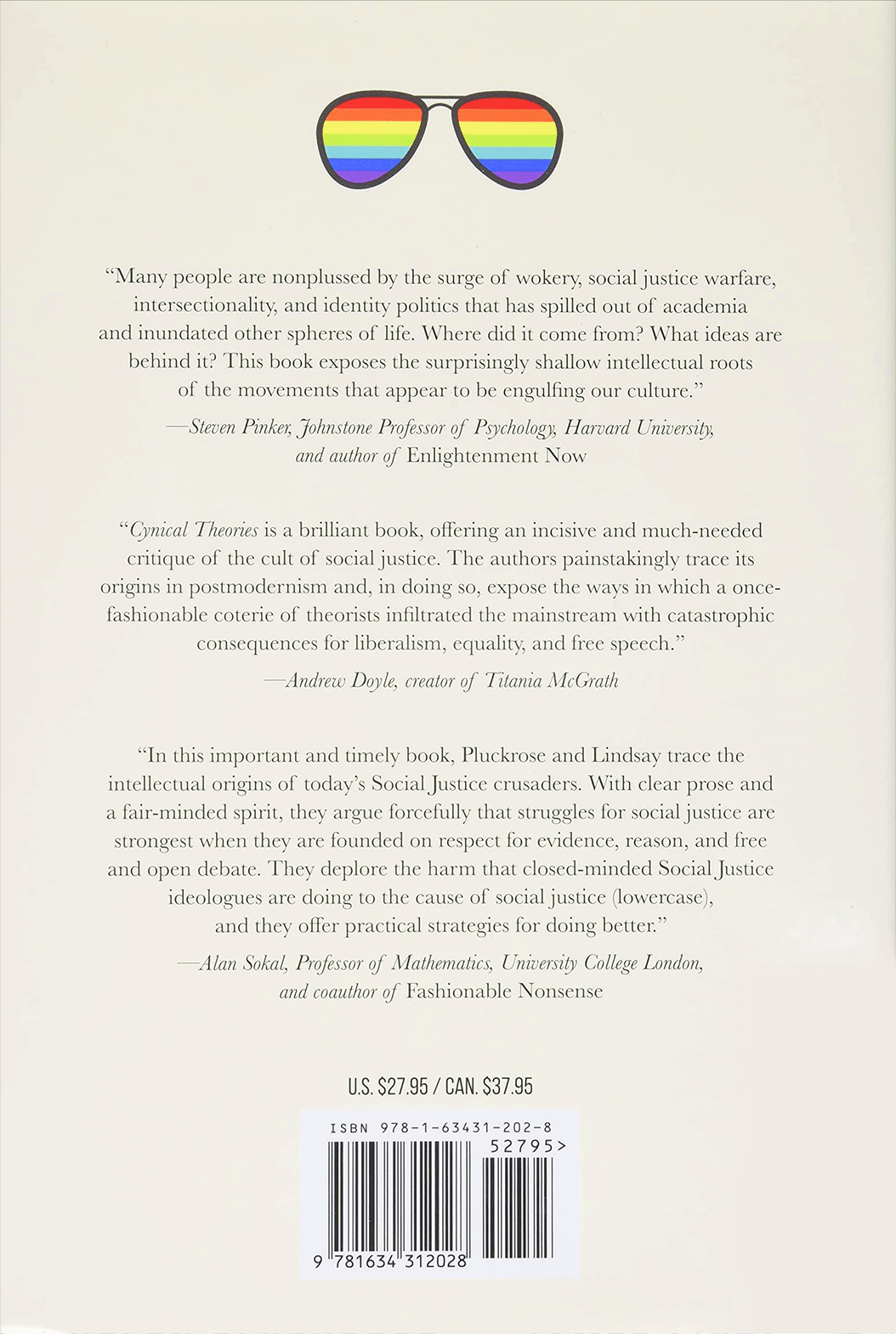 Cynical Theories: How Universities Made Everything about Race, Gender, and Identity – and Why This Harms Everyone

“Critical race Theory’s hallmark paranoid mindset, which assumes racism is everywhere, always, just waiting to be found, is extremely unlikely to be helpful or healthy for those who adopt it….If we train young people to read insult, hostility, and prejudice into every interaction, they may increasingly see the world as hostile to them and fail to thrive in it..” [132]

Many say we are living in a Great Awokening, an age in which the institutions and traditions of Western civilisation are being declared racist, homophobic, transphobic, and misogynist, and need to be torn down and replaced. This Great Awokening is most spectacularly seen in the transgender movement and the Black Lives Matter movement, both of which wish to see a new cultural revolution in the West. But where did these movements come from? As Pluckrose and Lindsay show, they come from a recent tradition of thinking called “applied postmodernism”, which is basically a hybrid of Marxism and the philosophy of Michel Foucault. It started in universities and is now spilling out into society at large.

Pluckrose and Lindsay call the broad church of critical theories or social justice theories “applied postmodernism”. This is a term of their invention and it is very useful.

Postmodernism is a philosophy that emerged most noticeably in the 1970s through French thinkers like Jacques Derrida, Michel Foucault, and Francois Lyotard; the latter coined the term “postmodern” in 1979. It was a reaction to the enlightenment certainty and optimism of what may be called modernism, with its belief in progress, science, and absolute truth. Modernism gave birth to ideologies, or what postmodernists call “metanarratives”: big stories or “isms” that explain human history as a journey towards the realisation of some ideal – whether liberty or equality or a scientific utopia – and which prescribe what the ideal society looks like. Metanarratives include liberalism, Marxism, scientism, and pretty much all religions.

Postmodernism rejects the notion of absolute truth, or truth that is true for everyone. Furthermore, it declares metanarratives to be mere strategic power plays or attempts at domination. As the authors say, “Postmodernism is characterised politically by its intense focus on power as the guiding and structuring force of society, a focus which is codependent on the denial of objective knowledge.” [35]

Although postmodernism is itself a descendent of Marxism, it has a significant difference. Marx saw oppression as a one-way vertical relationship between the rich and the poor. Postmodernism offers a far more complex, even chaotic picture.

“In postmodern Theory, power is not exercised straightforwardly and visibly from above, as in the Marxist framework, but permeates all levels of society and is enforced by everyone through routine interactions, expectations, social conditioning, and culturally constructed discourses that express a particular understanding of the world.” [36]

For postmodernism, all social relations, ideas, institutions, practices, and traditions are ultimately about power, regardless of whether their participants recognise this. In this sense postmodernism is a deeply cynical theory.

Pluckrose and Lindsay go on to offer accounts of the various forms of applied postmodernism with chapters on postcolonial theory, feminism, queer studies, gender studies, and critical race theory.

CRT is the animating ideology behind Black Lives Matter (BLM). In contrast to much queer and gender theory, Pluckrose and Lindsay commend CRT for its clarity, probably, they say, a characteristic bestowed upon it by its origins in law departments.

The essence of CRT is its rejection of the view that race relations have steadily been improving. In fact, according to CRT, racism hasn’t so much been declining as it has been becoming more difficult to detect: adapting to a society that ostensibly deplores racism. Pluckrose and Lindsay quote one of the most influential of the theorists, Derrick Bell, who in 1987 said “progress in American race relations is largely a mirage obscuring the fact that whites continue, consciously or unconsciously, to do all in their power to ensure their dominion and maintain their control.” [115]

It is important to point out that in criticising CRT the authors are not denying the reality of racism. But Pluckrose and Lindsay aren’t convinced by the suggestion that racism has barely improved. They say that CRT almost invariably focuses solely on lingering racism and completely ignores obvious racial progress such as economic and educational advancement among African Americans, and immigrants in general throughout the West, not to mention the disadvantages suffered by millions of whites.

Emerging out of CRT is the concept of intersectionality, which has relevance beyond race. The term was coined by Kimbery Crenshaw in her influential essay ‘Mapping the Margins: Intersectionality, Identity Politics, and Violence against Women of Color.’ Crenshaw points out that many victims of oppression have multiple identity markers that subjugate them in modern society. For example, a black, gay woman, is discriminated against because of her race, sexuality, and sex. In other words, the daily life of such a woman is akin to standing in the middle of an intersection and being hit by oncoming traffic from all directions.

Intersectionality allows us to rank people in terms of their victimhood status: the more intersections one is standing in the midst of – race, sexuality, disability, sex, body shape – the bigger a victim one is.

As well as pointing out CRT’s extremely selective use of statistics and lived experiences, Pluckrose and Lindsay point out that any racial minority who imbibes CRT is actually worse off:

“Critical race Theory’s hallmark paranoid mindset, which assumes racism is everywhere, always, just waiting to be found, is extremely unlikely to be helpful or healthy for those who adopt it….If we train young people to read insult, hostility, and prejudice into every interaction, they may increasingly see the world as hostile to them and fail to thrive in it.” [132]

Queer theory is an umbrella term for a discipline that seeks to undermine received ideas regarding sex, sexuality, and gender. Its major inspiration is the work of Michel Foucault, who made it the focus of his career to destabilize notions of sanity, health, gender, and sexuality. His book A History of Sexuality, vol.1, is seminal in this regard. As the authors say, it is probably best defined negatively. According to queer theorist David Halperin “queer” is “whatever is at odds with the normal, the legitimate, the dominant. There is nothing in particular to which it necessarily refers. It is an identity without an essence.” [95]

Central to queer studies is a “radical neglect of biology” in preference for an approach that is “radically socially constructivist”. [96] It also seeks to break down binaries, namely gay-straight and male-female. Following the spirit of Foucault, queer theory says that all binaries are forms of oppression imposed on society by “discourses” of what is “normal”, “natural”, and “healthy”. In that respect queer theory, like all applied postmodernism, has a liberation agenda: to free people from such constricting binaries. The transgender movement is the most recent manifestation.

According to Pluckrose and Lindsay feminism took an inward, navel-gazing turn during the 1980s from which it has not recovered. During the 1960s and 1970s feminism was characterised as liberal, materialist, and radical. It was liberal in that feminists, according to the authors, broadly accepted political liberalism and merely wanted its rights and benefits extended to women. It was materialist in the sense that it was concerned with the economic and career prospects of women. And it was radical in that it sought to overturn what has since been called “the patriarchy”. [137] In other words, so-called second-wave feminism was practical. It also took for granted that the category ‘woman’ meant something across space and time.

With the rise of intersectionality theory in the 1980s feminism turned inwards and became increasingly self-obsessed and self-critical. Black feminists accused feminism of being overly preoccupied with the experiences of middle-class white women. Lesbian feminism accused the tradition of being homophobic. [139] Queer theorists increasingly put pressure on feminism to reject the very category of woman as having any grounding in objective biological reality.

The postmodern influence of Foucault and queer theory led gender theorists down a path of breaking from feminism’s traditional belief that the category of ‘woman’ is objective and biological, even if social gender roles were often mere social constructs of the patriarchy. American gender theorist Judith Butler is the most important thinker in this respect. Butler not only asserted that social gender roles were mere social constructions, but went even further to say that sex itself, the very notion of male and female, are social constructs. Sex and gender are mere performances of scripts written by the patriarchy.

In other words, there is no such thing as the female experience, as opposed to countless subjective experiences by individuals who are treated, by themselves and others, as female. Understandably, Butler helped put radical transgender theory on the academic map, for if both sex and gender have no objective basis, then why shouldn’t someone traditionally considered male be able to perform the role of female, and vice versa?

Pluckrose and Lindsay find the postmodern turn in feminism to be both counterproductive and conceptually ridiculous. It is counter-productive because it has become mired in endless debate on the nature of feminism, seeking an expression of feminism that can avoid all charges of racism and homophobia, while at the same time constantly on the lookout for alleged racism and homophobia in feminism. Also, the suggestion that there is no objective reality to the category of ‘woman’ is fanciful and completely undermining of the feminist tradition itself.

Pluckrose and Lindsay finish their book by pointing to a way forward, a way out of the confusion and conflict begotten by applied postmodernism in all its forms. They essentially call for a return to liberalism and science. That is, a return to seeing people as rights-bearing individuals, rather than members of tribes and identity groups, and anchoring social theories in science, especially biology.

The essence of liberalism is a non-utopian, moderately sceptical quest for social improvement based on Enlightenment reason. It is also grounded on the assumption of human dignity. Indeed, “over the last five hundred years [liberalism has] produced the freest, most equal societies, with the least suffering and oppression, the world has ever known.” [243]

Cynical Theories is the best account of the theoretical foundations of modern wokeism available. Even though many of the theories of applied postmodernism are difficult to follow, Pluckrose and Lindsay explain them with exceptional clarity. It is essential reading for university students and their parents.

One might take issue with the secular humanist narrative in the final chapter. Essentially liberalism is portrayed as an ideology emerging out of an intolerant, religious dark age. The problem here is that the basic principles of liberalism – individualism and human dignity – are not grounded in the science or scepticism so praised by the authors. A mountain of recent scholarship shows them to be grounded in the West’s Christian heritage. Tom Holland’s celebrated book Dominion is crucial in this respect. In other words, contrary to Pluckrose and Lindsay’s analysis, science and scepticism are almost certainly not sufficient to ground the moral principles of the liberalism that they see as the only antidote to wokeism.

That point aside, Cynical Theories is an important book that will shed much light on the phenomenon of wokeism today.