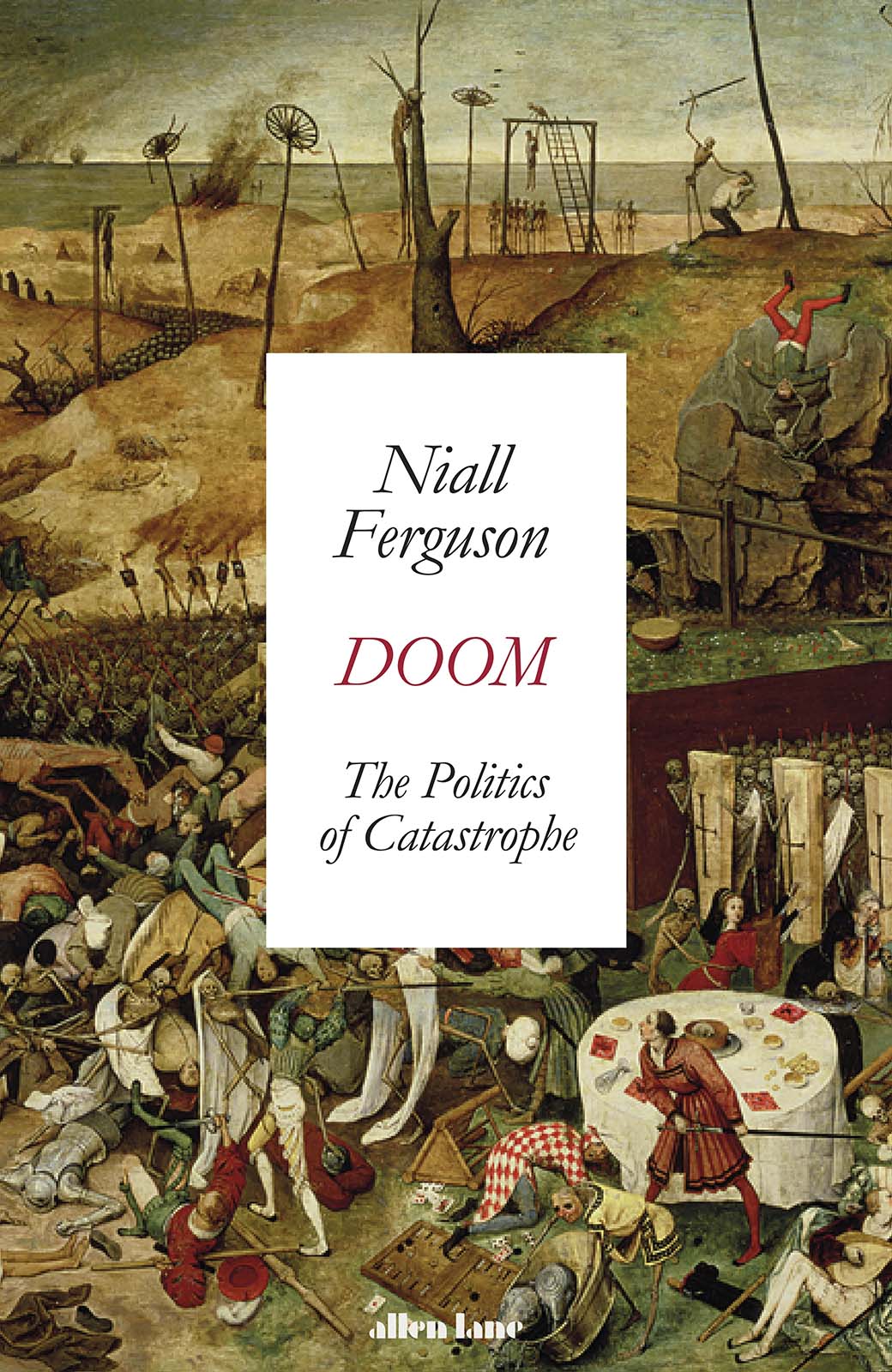 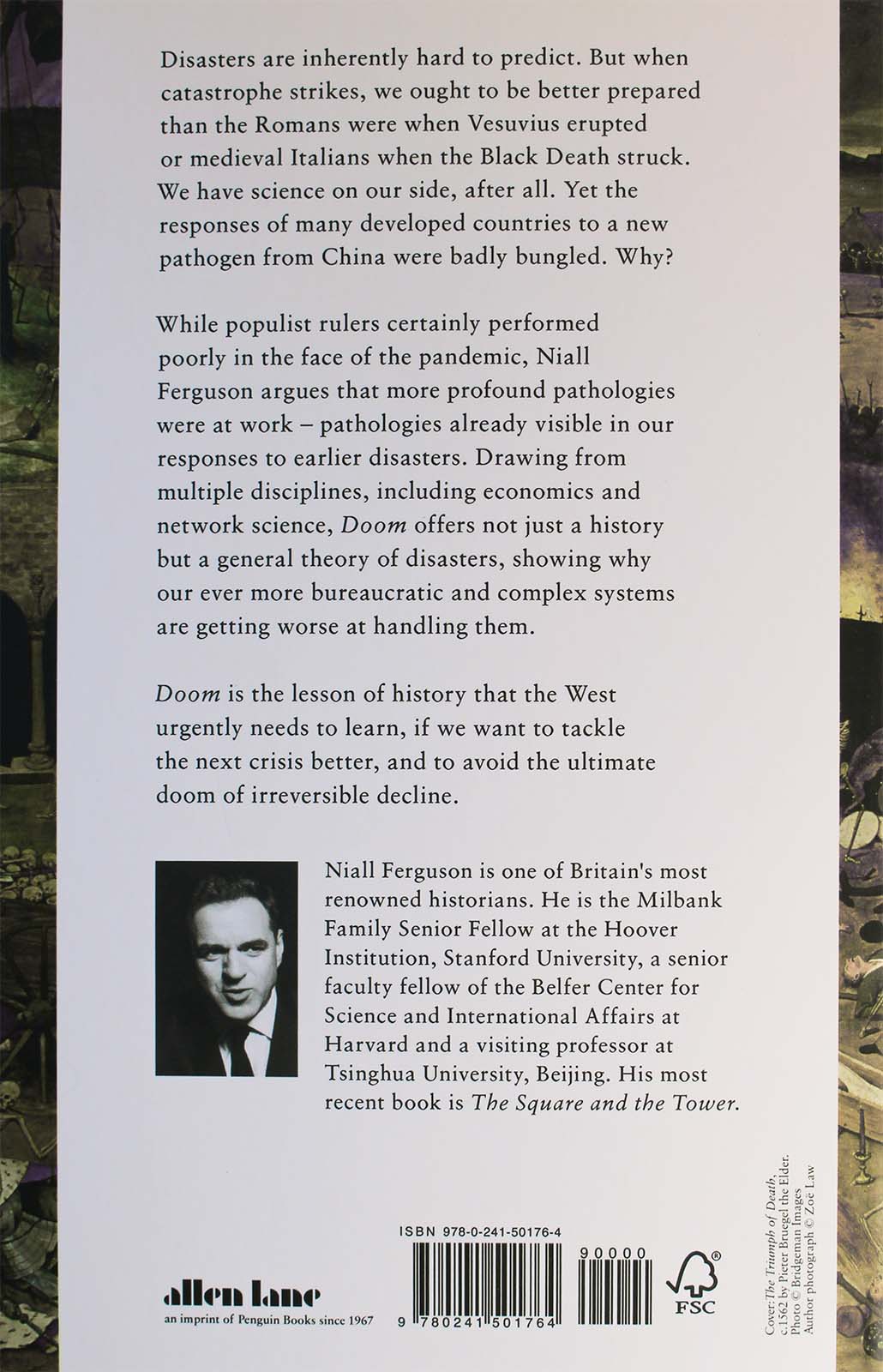 Doom: The Politics of Catastrophe

“…the more networked human society becomes, the greater the potential for contagion, and not just of the biological variety. A networked society needs to have well-designed circuit breakers that can swiftly reduce the connectivity of the network in a crisis, without atomizing and paralyzing society completely.”

Disasters—viral, economic, war-related, and natural—have a major impact on human history. Some disasters are so great that they inspire cults of doom: movements that predict the end of the world unless some form of repentance and penance is made—lowering emissions, destroying nuclear arms, changing social behaviour to avoid contagion. Think Extinction Rebellion, for example. Historically we tend to draw sharp distinctions between man-made and natural disasters. The eruption of Mount Vesuvius (AD79) and the Lisbon earthquake (1755) are natural disasters, whereas World War I and the Challenger space-shuttle disaster are man-made.

In Doom Ferguson contends that once we distinguish between the disastrous event that may be natural/accidental—earthquake, volcanic eruption, disease, massive mechanical malfunction—and the destruction such events cause, we see that disasters are not entirely beyond the choices and control of humans. Put another way, the extent to which a disastrous event wreaks havoc on humanity is to a large degree a result of human choice and policy: the choice to build a town near a flood-zone or volcano; bloated and inefficient bureaucracies; and, importantly, our networks that allow viruses and misinformation to spread.

In other words, natural disasters are at least as much a product of politics as they are of nature.

“Asian disasters tend to be worse than Western ones.” (100) This statement itself indicates that there must be more than nature at work in disasters, for isn’t nature the same in Asia as elsewhere? Ferguson goes on to point out the three factors that determine the carnage-factor of any disaster (121-122):

Certainly Asian regions have 1 and 2 in spades, and increasingly 3 (Ferguson later shows how while the Wuhan pandemic was underway thousands flew out of Wuhan all around the world). Thus, according to Ferguson, “The history of disease is a protracted interaction between evolving pathogens, insect or animal carriers, and human social networks.” (119)

We may think that the reason we have overcome disease and early death is largely because of advances in medicine. Ferguson suggests otherwise and points in a more banal direction. It is building progress and engineering that have been largely responsible for improved health and life-expectancy over the past 100 years. The shift in Europe from wooden and thatched walls to brick walls and tiles, which are easier to keep clean; ventilation; draining swamps; and hydraulic water circulators in canals and cisterns to prevent sitting water, all helped produce a revolution in health and life expectancy between the nineteenth and twentieth centuries.

The twentieth century was still an age of disaster, beginning with WWI and then passing through the Spanish Flu. WWI witnessed 10,000,000 men killed in battle, and the Spanish Flu of 1918 saw between 40-50 million people die worldwide. (162, 165) And then there was WWII. As Ferguson says, “The twentieth century was extraordinarily wasteful of young men.” (162) We may be tempted to think that WWI, hardly a natural disaster, was in leaders’ control. But Ferguson sees it as a human-caused event but still largely a product of miscalculation and limited knowledge. In other words, strictly speaking, not engineered by anyone and not under the control of anyone in particular.

Doom shows that we are far from passive in our fate, but we are vain to think we are in control even of events that begin and end with our own decision making. But at the same time, we are equally misguided in thinking that we cannot plan for disaster. Not that disasters can be entirely avoided, but that through enlightened public policy the worse effects of them can be mitigated. This seems to be the message Ferguson is trying to convey, and it becomes obviously relevant in the later chapters dedicated to the present Covid pandemic.

Before we get to his analysis of Covid, Ferguson shows how all too often catastrophes such as the Chernobyl nuclear explosion and the Challenger disaster, both in 1986, were made possible by unwieldy, opaque bureaucracies, and, in the case of Chernobyl, an opaque and unaccountable government. In other words, all disasters have a cause, and sometimes the cause is political-bureaucratic.

Ferguson’s section on Covid is the most balanced available on the topic, particularly as he deals with its spread in America – Ferguson’s adopted home – during the late-Trump presidency. It is also in these chapters that Ferguson shows the interplay between politics, systems, individuals, and impersonal forces (plague, in this case) so central to his overall thesis of describing the complexities of disasters.

The instinct for people to blame leaders for disasters—Trump or Boris Johnson for the disastrous effects of Covid 19, for example—is strong. But Ferguson, citing Tolstoy, calls this the “Napoleon Fallacy.” That is, blaming a single person for a massive event whose true causes are far more complex. Despite the fact that on numerous occasions Ferguson says Trump “bungled” the response to Covid, Ferguson also says that the disastrous effects of Covid in America were less Trump’s fault than they were the failure of a whole system. American bureaucracy is federalist and complex, meaning that a swift policy response to Covid was never going to be as easy as it was in, say, Singapore or Israel. This is not even to mention many Americans’ individualistic, anti-authority tendencies, as opposed to the tendencies in, say, small Asian nations, to more readily obey the government.

Some may conclude from this analysis that the best way to prevent a similar disaster befalling America is to centralize American power more in the federal government. Ferguson is more cautious, however. Ironically, says Ferguson, this response fails to appreciate that many disasters are caused precisely by such centralized and unaccountable power: communist famines and China’s ability to successfully cover up Covid 19 for months serve as examples.

Ferguson identifies another modern social dilemma that may make it more likely that a disaster will wreak more havoc than it might have generations ago: the decline of social bonds. He says, “it seems plausible that a society with a stronger fabric of family life, community life and church life was probably better equipped…to withstand the anguish of excess mortality than a society that has in so many ways “come apart””. (234) In this respect the health of the family and civil society is one of several concerns we must address to help minimise the effects of disasters in the future.

Ferguson’s diagnosis of what went wrong in America is comprehensive and damning. He outlines what areas of American institutional life require reform – “disruption.” It is well-worth quoting in full:

“Our plague is likely to have the biggest disruptive impacts on places where progress had already ceased and stagnation had set in. First in line for disruption should be the bureaucracies that in some countries, including Britain and America, so badly failed to deal with this crisis. Next should be those universities that were more interested in propagating “woke” ideology than in teaching all that can profitably be learned from science and the human past. I would hope, too, that the second contagion—of lies and nonsense about the first one—will at last prompt a challenge to the current combination of monopoly and anarchy that characterizes the American (and hence much of the global) public sphere….Finally, the pandemic ought to force some changes on those media organizations that insisted on covering it, childishly, as if it were all the fault of few wicked presidents, prime ministers and advisers. If stagnating institutions are shaken up by this disaster, there is just a chance that we shall see a return to progress in places where, up until 2020, the most striking trend had been degeneration. By killing those parts of our system that failed this test, COVID-19 might just make us stronger.” (384)

Ferguson’s study ends by challenging us to review our state bureaucracies so as to leave countries in a stronger position to avoid the worst effects of future disaster events, which are inevitable, but also to ensure they are open and accountable enough to avoid being the source of future disasters.

Doom is yet another work that shows the virtuoso range of Ferguson. Although it draws on some themes of his earlier work on networks, it is very different from anything he’s written previously. It ranges from diseases to wars to religious movements to nuclear catastrophes to space-shuttle disasters to environmental apocalypse. No brief review could possibly cover all of its insights.

Many will find the most engaging and relevant chapter of the book Chapter 9, which outlines how governments and bureaucracies responded to Covid. The earlier discussions of Influenza (1918) and the Asian Flu (1957-8) are also valuable in terms of putting the present pandemic into some historical context. The book is incredibly rich in themes and detail and will repay very close reading, even twice over.

In that respect, one critique of the book is that it may be a bit too long. It’s not that any part of it is dull – it isn’t – but it may be the case that parts could have been pruned to make the reading load lighter. Having said that, there is much to be gained all through the book.

In fact, there is almost another book contained within Doom that Ferguson should write, namely a comparative study of the politics of Covid between America, Australasia, Europe, and Asia. If Ferguson wrote it with the same objectivity and style as he has the later chapters of Doom then it would no doubt be the most valuable thing written on the current pandemic to date, eclipsing the best discussion available right now – Doom.