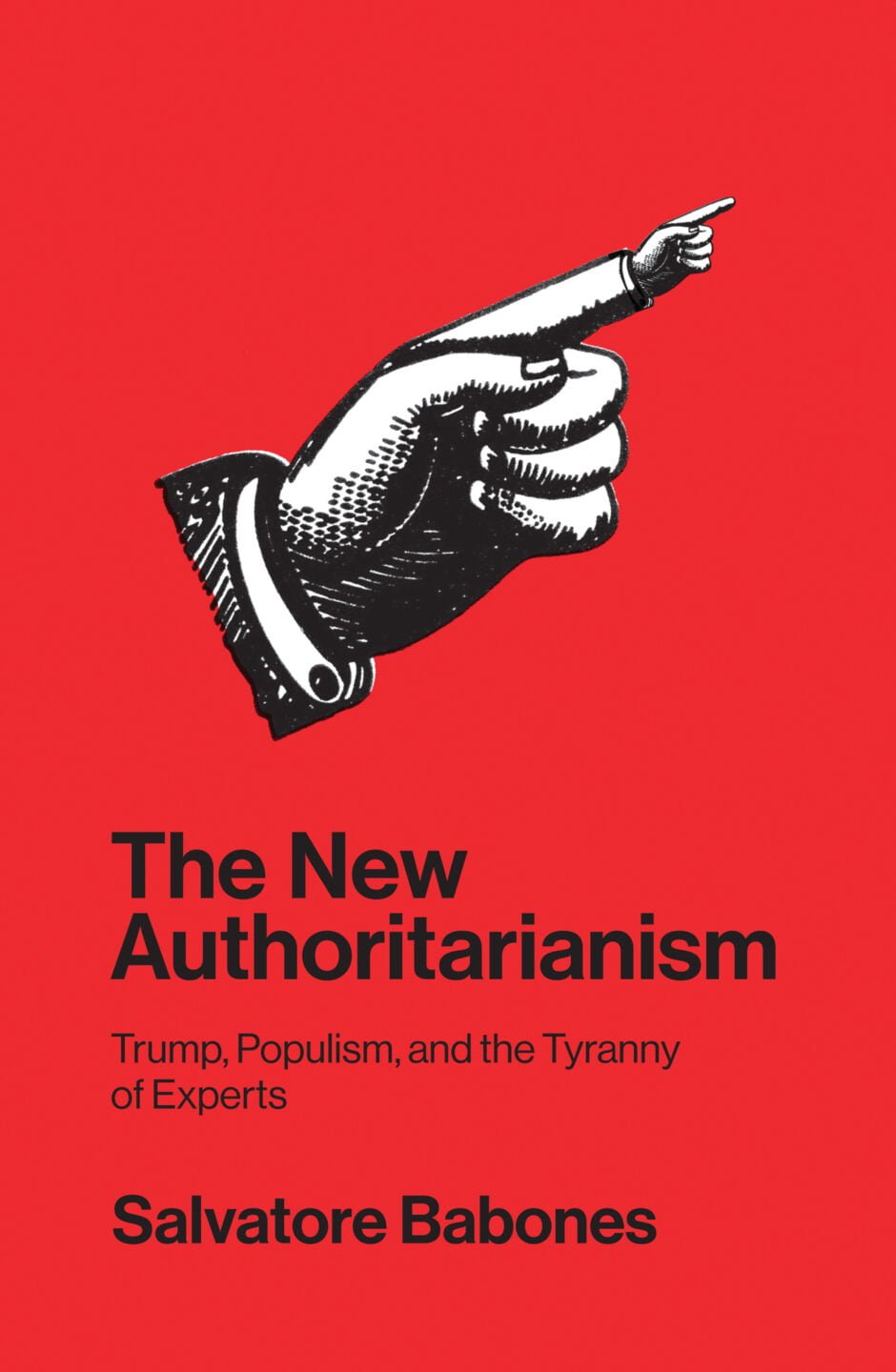 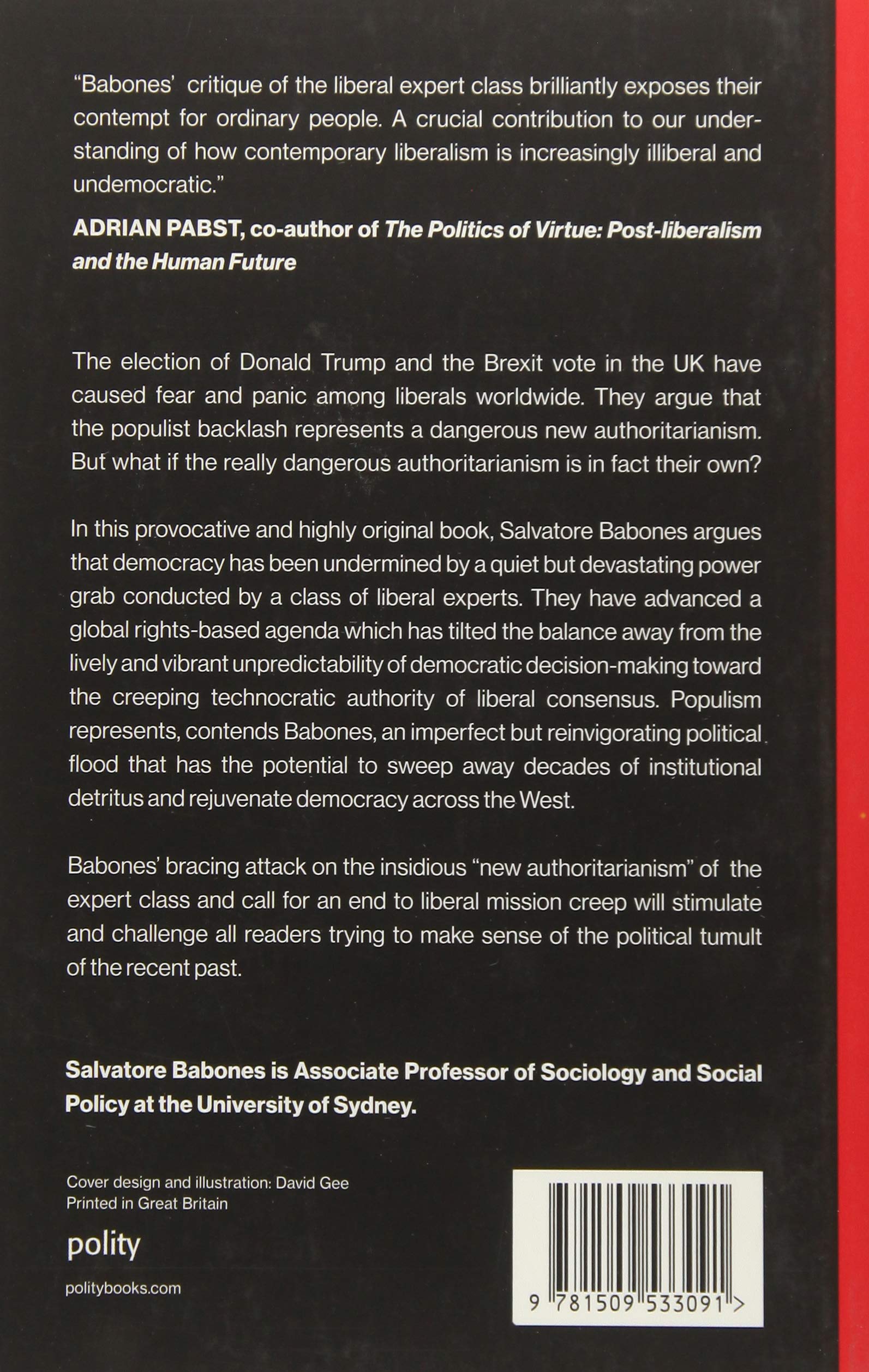 The New Authoritarianism: Trump, Populism, and the Tyranny of Experts

Salvatore Babones’ award-winning study of the rise of technocracy is one of the most insightful books published in recent years. Although written during the Trump years, which are now behind us, his study places Trump within a much larger global context of the rise of legal, medical, and technocratic elites who have increasingly wrested the reigns of legislation and policy-making from the people and their elected representatives. Despite being published before the events that have made 2020 so memorable, Babones’ offers an analysis that makes sense of much of what has occurred globally over the past twelve months.

The West, according to Babones, may be exiting an historical period of democracy and entering into a new phase of government—rule by an unelected class of faceless economic, scientific, and human rights experts. A technocracy. This is the new authoritarianism.

The new authoritarianism is nourished by a cosmopolitan class of elites educated in around 25 of the world’s top institutions who have little in common with people outside of their class. The growth of this class has occurred with the shift in the nature of liberalism in the West.

Central to Babones’ analysis is freedom. Liberalism’s basic ideal is freedom. But what is it to be free? Traditional or classical liberalism defined—and in its modern libertarian expression, continues to define—freedom negatively: the absence of interference from the state in the lives of individuals and corporations. Drawing on the language of the Declaration of Independence (1776), one could say that classical liberalism centres around the right to pursue happiness without state interference.

Alternatively, the more progressive definition of freedom defines it in positive terms: one is free when one has all one needs to have choices in life. In other words, the new freedom is rights based: a right to basic income, employment, good health, and education. There is a subtle shift here from classical liberalism’s right to pursue happiness to progressive liberalism’s right to be happy. And what is the job of the state other than to ensure that its citizens rights are enjoyed?

But this shift in what freedom means suggests that the state is responsible for providing these rights. And providing these rights is a complex exercise and requires much research and expertise—economic, sociological, therapeutic, and legal. Enter the experts whose job it is to ensure that governments honour these rights and thereby ensure our right to be happy.

“Unlike governments, these experts are not directly accountable to the people and need not face the judgment of the people at election time. And they don’t feel obliged to take the popular will into account at all….Experts only have to answer to other experts. They are self-referential authorities.” (20-21)

But this form of authoritarianism has one mortal enemy: populism. In other words, liberalism and its insistence on certain national and international rules and rights is in tension with democracy—the brute will of the people.

In recent years this tension has come to a head most spectacularly in the Brexit victory in 2016 and then with the election of Donald J. Trump as 45th President of the USA later that year. Both movements defined themselves in opposition to the tyranny of experts.

Technocrats in Action: Europe, US, China

For Babones, the European Union is the embodiment of this new authoritarian technocracy par excellence.

The tension between liberalism’s urge to rationalize all laws and systems according to an abstract liberal understanding of freedom and fairness and the will of the people has been central to events within Europe and the US over the past decades.

“The European Union…has from its origins been an experts only zone….Much more than the UK or the US, it provides the ideal institutional environment for the flourishing of the liberal authoritarianism of the transnational expert class.” (34)

The disregard for democracy was most evident in the EU’s response to the democratic rejections around Europe of the European Union Constitutional Treaty in 2005.

Experts took three years to draft the Treaty, which required unanimous member-state ratification, only for it to be rejected by the citizens of member states France and the Netherlands in their referenda. Other member states including the UK, Sweden, and Denmark subsequently cancelled their referenda. Apparently the Treaty had failed. But rather than concede that the people had spoken, the EU experts set to work “not to meet the voters’ objections (which they considered irrational) but to find a way to circumvent them.” (67) The outcome was the Lisbon Treaty, which “implemented much of the originally intended European Constitution as a series of amendments to existing treaties rather than as a new basic law.” (67-68)

“The cosmopolitanism of today’s global expert class is what makes populist nativism so abhorrent to them.” (62)

The huge and effective resistance that the EU put up to make the UK’s exit from the EU complex and painful demonstrates the power that its legal technocrats have over the fates of countries merely following clear democratic mandates.

The threat that populism poses to the designs of liberal elites is simply that the free will of the people, by definition, is uncontrollable and therefore unpredictable. Democracy need not conform to the pre-ordained, utopian plans of liberal technocrats. And the personification of populist nativism was, of course, Donald Trump.

In the US the expert class was working away at resetting US trade laws away from control by elected legislators and into the hands of transnational elites. The Trans-Pacific Partnership (TPP), North American Free Trade Agreement (NAFTA), and the Paris climate agreement were all engineered by high-level bureaucrats and either had or would have significant effects on US economics and trade. Trump the nationalist vetoed the TPP, mercilessly attacked NAFTA as a “bad deal” for Americans and reopened its negotiations, and pulled America out of the Paris climate agreement altogether.

China has no such tension between liberal elites and the people. “In China rights are granted to people on a technocratic basis, when experts judge them appropriate.” (60) Thus, while Chinese technocrats were worried about overpopulation they imposed draconian penalties on parents who had more than one child. Now that they are worried about under-population—the legacy of the one-child rule—they are encouraging multiple children. “China’s people don’t lack liberal rights like paid maternity leave. What they lack are basic freedoms—and, of course, democracy.” (54)

The Clash of Identities

The Brexit movement and Trump’s policies regarding immigration could easily be hijacked by racists and racist rhetoric. But both are better described as nativist rather than racist. Either way, both Brexit and Trump were abhorrent to the liberal internationalist expert class. In the case of Brexit,

“The expert class on both sides of the Channel reacted with shock, dismay—and fury. They suggested that the elderly and less educated were not qualified to vote on such a complicated issue. They attempted to use the courts to delay or obstruct the implementation of the referendum decision, and attempted to persuade Parliament to overrule the people’s (non-binding) verdict.” (82)

Trump’s nativism has a long history in American politics and political rhetoric. Calls for ‘America first’ and loud denunciations of international financial elites stretch back at least as far back to George Washington’s the speeches of George Washington, through to the famous “Cross of Gold” speech (1896) of Democrat presidential candidate William Jenning’s Bryan, to the nativist policies and anti-elite rhetoric of Franklin Delano Roosevelt. Arguably, the “We the people” of the Declaration of Independence set the nativist theme in much American politics.

This nativist tradition has always been decried by the liberal expert class for subordinating the rationality of liberalism’s vision of a world united by a single economy to the narrow self-interest of the nation. As always, the liberal elites protestations thunder out like the crash of a wave against the rock of the people.

If there is a book that needs a revised and updated edition, it is Babones’ New Authoritarianism. The Covid crisis and the Black Lives Matter protests and riots in America and Britain, and the 2020 US presidential election and its aftermath sorely need an analysis in the context of the rise of the technocracy and populist revolts. Such a revision would also be well-served by further elucidating the distinction between liberalism and progressivism; a distinction that will presumably sit beneath many of the ongoing tensions in the West for years to come.

“The great spiritual danger facing twenty-first century democracy is that liberal intellectuals increasingly dismiss the moral right of less-educated people to have opinions that conflict with the consensus wisdom of the expert class.” (103)

Populism is made possible when a desperate people feel their preferences are locked out of all policy options; policy options largely defined by the expert class itself. What’s more, historically, populism tends to fail, but not necessarily entirely. Perhaps the legacy of Trump and Brexit will not be the realization of all the populists’ promises, and their desperate constituents’ dreams. Perhaps their legacy will be to force existing representative institutions to be more representative of the great portion of the people. After all, the last five years have shown that there are limits to ordinary people’s tolerance of the tyranny of experts.