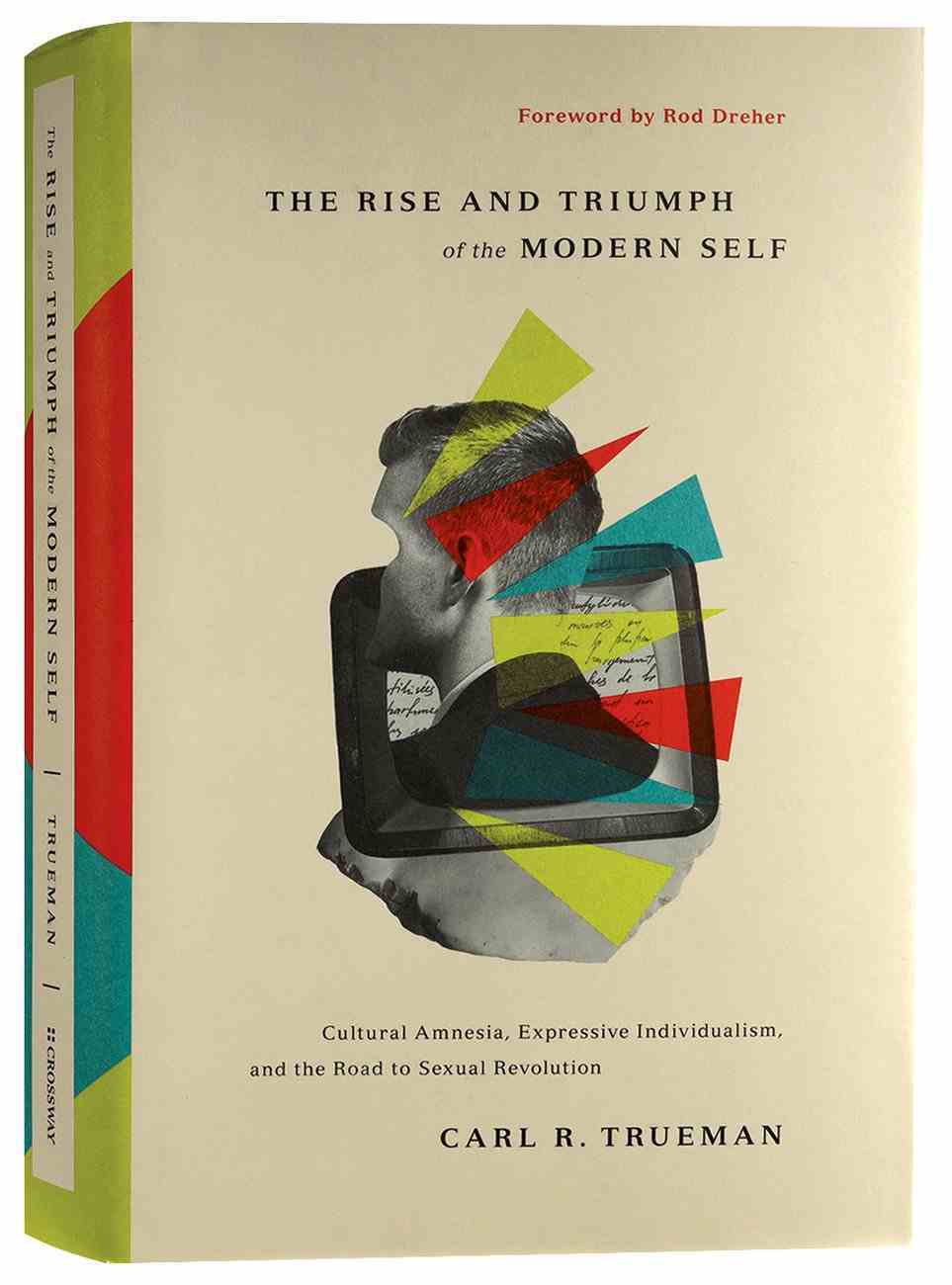 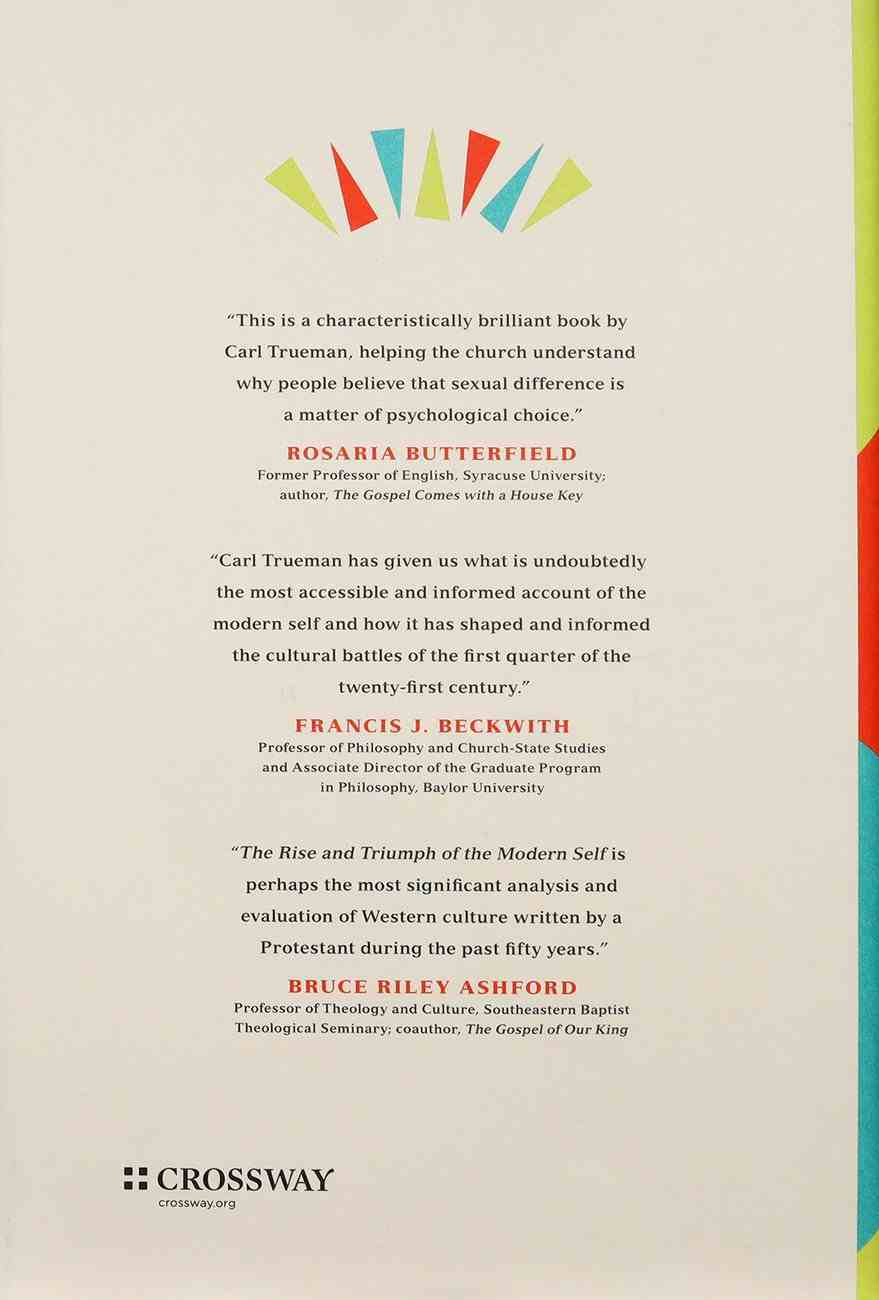 The Rise and Triumph of the Modern Self: Cultural Amnesia, Expressive Individualism, and the Road to the Sexual Revolution

“That which was previously deemed good comes to be regarded as bad; that which was previously regarded as healthy comes to be deemed sickness. The turn to the psychological self is fundamentally iconoclastic….For example, language will become much more contested than in the past, because words that cause “psychological harm” will become problematic and will need to be policed and suppressed.” (55)

“I am a woman trapped in a man’s body.” This is a statement that our grandparents or even our parents who didn’t live beyond the year 2000 would probably not have understood (20). How did the claim to be trapped in the wrong body go from being utterly inexplicable to totally understandable? This is the question Carl Trueman answers in his latest book.

In short, the West has undergone a great philosophical shift from the objective to the subjective, which has led to a personal identity shift from body-and-world-oriented to feelings oriented. Trueman’s analysis explains current attacks in the West on our freedoms, particularly of freedom of speech and religion. According to Trueman, as long as we make our feelings the centre of our identity and moral universe, the more people’s opinions – religious or secular – on sexuality and gender challenge people’s feelings, the more such speech will feel like an attack, and be called dangerous “violent”, and “harmful.”

Foundations of the Revolution

According to Trueman, Marx, Darwin, and Nietzsche are “arguably the most influential as fountainheads for later developments up to the present day.”(166)

Although Karl Marx did not succeed in inspiring political and economic revolutions in Western countries like Britain and America, he did influence generations of thinkers, who went on to influence generations of teachers, journalists, artists and ultimately ordinary citizens, particularly in the 1960s and 1970s. Central to Marx’s influence is his view that society is little more than an arena of oppression, and that all aspects of social life are forms of oppression devised and driven by the rich. This means that, for Marx, everything is political, or in modern terms, “the personal is political.” (191)

Charles Darwin’s evolutionary theory of natural selection displaced God in the minds of many. Prior to Darwin’s theory most people, including scientists, thought of themselves as designed by God with a goal of how we should live, or a telos. According to Trueman, “teleology enables individuals to distinguish between what they are and what they should be.” (82) By displacing God as the author of our nature and replacing it with survival of the fittest, Darwin destroyed the plausibility that we are teleological creatures. Hence the plausibility that human nature and biology, because God-ordained, should be any moral guide was obliterated. This means that humans are theoretically free to make of ourselves whatever we want; to be “plastic people.” (163)

Friedrich Nietzsche, like Darwin and Marx, rejected Christianity and sought an alternative worldview through which to live. Nietzsche famously said “God is dead”, but, for Nietzsche this meant that the very foundations of morality and meaning as his contemporaries understood these is removed. For Nietzsche, programmes of moral and social improvement rest on the notion that there is a God or an ultimate standard of law and morality. Thus, says Trueman, “The cheerful and chipper atheism of a Richard Dawkins or a Daniel Dennett is not long for Nietzsche because it fails to see the radical consequences of its rejection of God.” (170)

What are we left with in the absence of ultimate transcendent meaning, according to Nietzsche? Power. For Nietzsche, reality becomes not a place where people recognise moral norms and strive to live accordingly, it becomes an arena of the pursuit of power, or in Nietzsche’s terminology, “the will to power.” (169)

A fourth thinker who laid the groundwork for the modern self was Sigmund Freud, the Viennese psychoanalyst. Trueman says, “Freud’s fingerprints are all over the Western culture of the last century, from university lecture halls to art galleries to television commercials.” (203) And it was the marriage between Marx and Freud that not only came to place sex and sexuality as central to our self-identity, but which led to the idea that we are sexually oppressed and that traditional sexual mores should be overthrown in a continuous sexual revolution that continues to today.

“The fusion of elements of Marxist and Freudian thought is central to the rise of the so-called New Left in the twentieth century,” according to Trueman. New Left thinkers like the Frankfurt School members Wilhelm Reich and Herbert Marcuse sought to inspire a revolution of society and morality that liberated people from traditional sexual mores and the family. Of course feeding into all of this was the feminist thought of Simone De Beauvoir and the explosive publications of Alfred Kinsey on human sexuality, including the sexuality of infants and children.

The sexual revolution was a process that took place from the 1950s through to the 1970s in which traditional sexual ethics, gender roles and the role of the family in society were questioned, criticised and largely overthrown. To a large extent it was made possible by the availability of effective contraception – “the pill” – in the early 1960s. The pill effected several revolutionary cultural changes: it severed the necessary connection between sex and pro-creation, allowing for the idea that sex could be recreational and without consequences. It gave women control over their reproductive potential, which allowed women to marry and put off childbearing in order to pursue education and a career. And it raised the question of the morality of saving sex for marriage, as opposed to extra marital sex and even so-called “free love” – promiscuity.

Another effect of this revolution was the undermining of the ideal of heterosexuality, with the rise of the assertive gay liberation movement of the late 1960s, which led most recently to the legalization of same-sex marriage in most Western countries.

With the decline of a sense that personal identity is grounded in something objective, such as God or a church or the nation, and our casting off of the idea of any authority beyond ourselves, we have come to see ourselves for the most part as bundles of feelings and desires. Fittingly we are also living in an age where the psychologists, not the theologians or the moral philosophers, are our moral gurus:

“psychological man and expressive individualism shape the dominant understanding of what it means to be a human self in this present age.” (64)

Also, given the decline of the view that nature or nature’s God has any authority over us, as well as the primacy of our feelings and the advances of medical and bio-technology, we believe that we can define who we are. This includes our gender. Thus, if I feel like a girl – whatever that means to the person making the claim – then I am a girl, and neither nature nor anyone else can say otherwise. Furthermore, I can use medical technology to bring my male body more in line with my feminine feelings.

Thus, the claim that I am a man trapped in a women’s body, or vice versa, has a meaning and plausibility today that it did not have fifty years ago. With this shift if a boy “feels” like a girl then he’s a girl.

What is this triumph of the modern self that Trueman speaks of? Essentially the domination of the idea that our feelings are supremely authoritative, that sexuality is central to our identity, and that modern society is an arena of conflict between those who are seeking to express their true sexual and gendered selves.

In this respect, says Trueman,

“The intuitive moral structure of our modern social imaginary prioritizes victimhood, sees self-hood in psychological terms, regards traditional sexual codes as oppressive and life denying, and places a premium on the individual’s right to define his or her own existence.” (63)

Implications for modern culture and freedom

This feelings-dominated age has led to a misguided empathy culture. “Take away the idea of universal human nature, and ethics descends into…subjective emotivism….Empathy on its own is liable not just to be a sentiment but to degenerate into a sentimentalism that simply wants other people to be happy in their own way on their own terms.” (128)

Trueman points out that,

“Certain forms of speech have been criminalized in some democracies precisely because of their connection to violence. And once violence comes to be seen to include the psychological, these laws become somewhat elastic in scope.” (327)

Thus, harmfulness is now attributed to words and ideas simply because they may make others feel bad about themselves.

Words can now be the cause of serious emotional harm and, therefore, like all forms of harm, are open to regulation and punishment by the government.

This is why institutions like universities, schools, the public service and corporations have instituted strict speech protocols designed to discourage or penalize any speech that questions or openly rejects people’s sexual and gender identities. Naturally, religious beliefs that believe in concepts like sin, objective and binary gender, and sexual morality that goes beyond mere consent – sex strictly within man-women marriage, for example – are increasingly deemed unsafe, harmful, and worthy of punishment, either by the government or by HR departments in universities, colleges or corporations.

For Trueman, the greatest hope lies not in trying to debate the new revolutionaries, although there is a place for debate. It lies in the powerful witness of living according to the Christian principles of sexual morality and family life that the self-expressive revolution have abandoned. Trueman likens the present age to the early centuries of Christianity. The early Christians won members of Roman society over not so much by clever argumentation, but by the way they lived. If there is to be progress generated by authentic living, says Trueman, it is not the self-expressive authenticity of the post 1960s world, it is living as an authentic Christian bound to Christian communities. This will speak much more effectively and deeply to the needs of people in this modern age, more effectively then the self-expressive revolution or its gurus ever will. (383-407)

The Rise and Triumph of the Modern Self is a dense but highly readable journey through the maze of ideas and events that have led to the cultural moment we are now in. However, it has only engaged a part of the complex argument.

One thing that was surprisingly omitted was the place and influence of the English utilitarian philosopher and social reformer Jeremy Bentham, who defined human agency in terms of pleasure and pain, and who must have been a central figure – along with the thinkers discussed above – in the transition away from transcendent, Christian foundations for law, policy, and identity, towards the feelings-oriented, expressive individualism that prevails today. One might also have benefitted from more discussion of the contribution that the two world wars, economic changes and technology played in the rise and triumph of the modern self. But in fairness to Trueman, he is aware of these issues and makes it clear that for the purposes of brevity he will focus principally on the history of ideas.

Trueman’s book is probably the most comprehensive, interesting and true account of the origins of the modern world that has been published in the last twenty years, that is, this century.