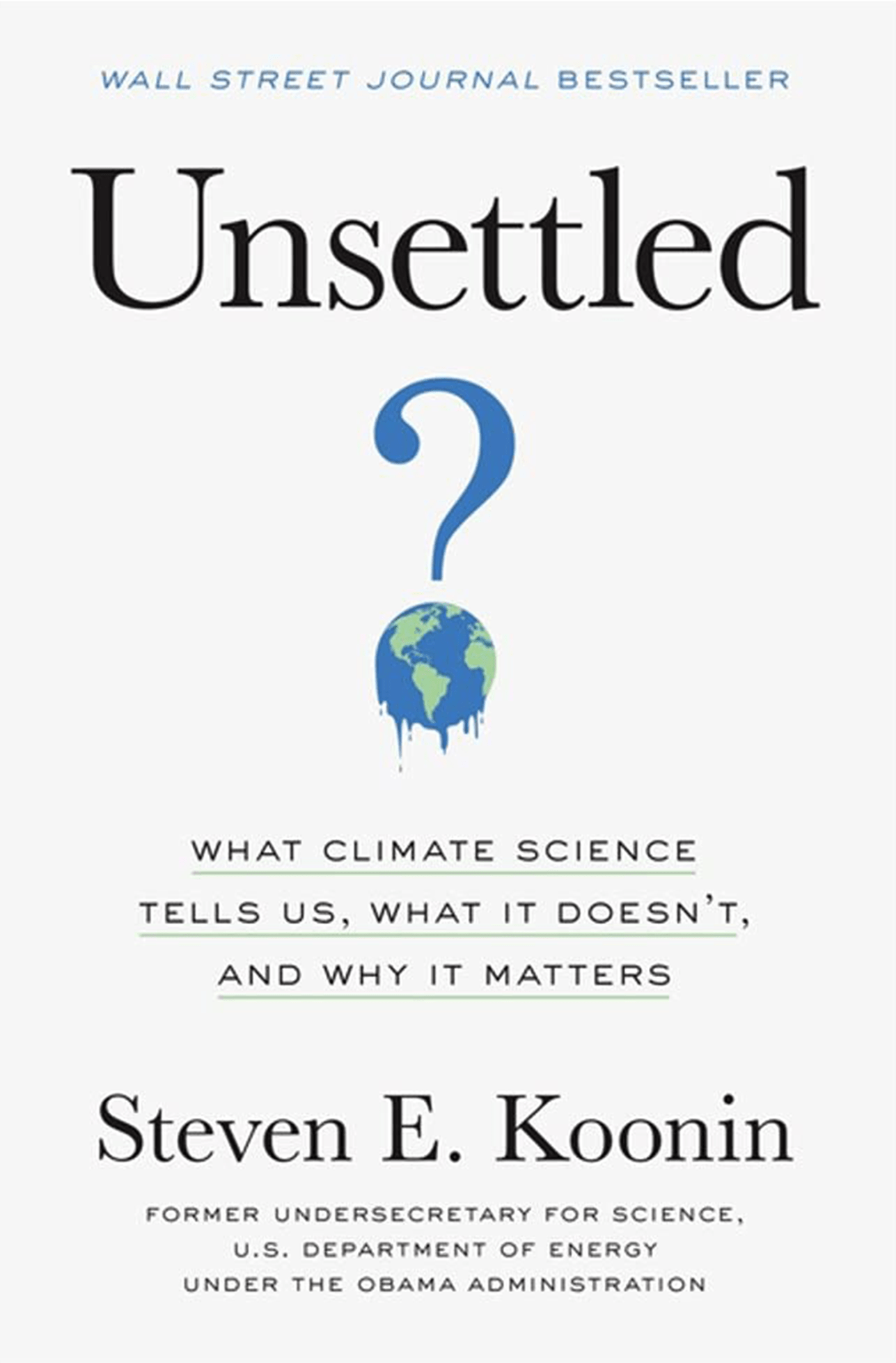 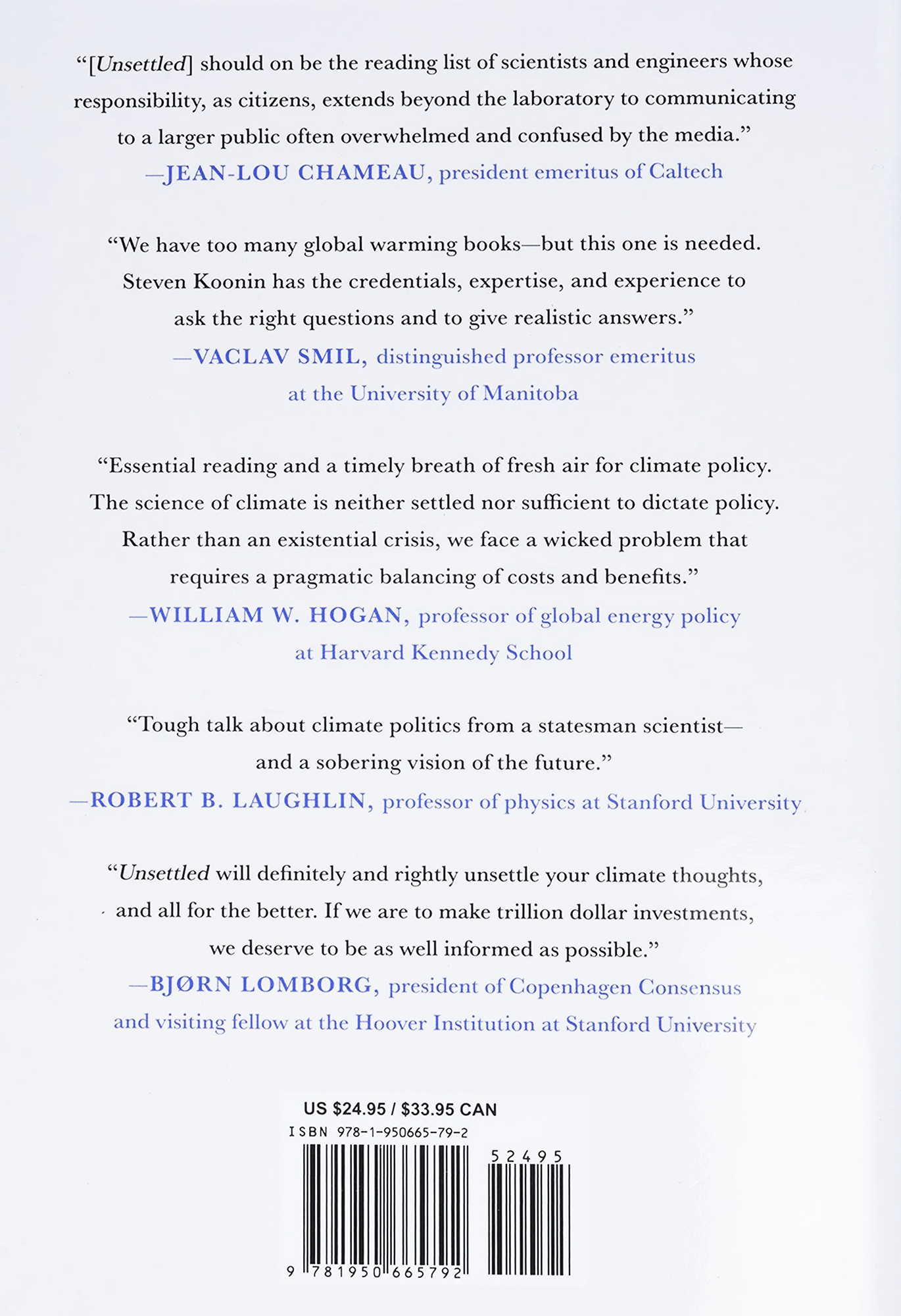 Unsettled: What Climate Science Tells Us, What It Doesn’t, and Why It Matters

“Science should not be partisan, but climate science’s intersection with energy policy and politics all but guaranteed that it would become so.”

In the debate over climate change and what to do about it, the statement “The science is settled!” has been repeated ad nauseam by journalists, activists, policymakers, and climate scientists. But what is ‘The Science’, exactly? Headlines are full of alarming predictions, such as “Sea level rise threatens low lying islands like the Maldives,” “Weather disasters becoming more frequent and costly”, and “We have gravely underestimated the economic cost of climate change.” It’s no wonder that 80% of young people in Australia are currently experiencing “climate anxiety.” And yet, though the evidence suggests that the climate has indeed changed, core questions about the climate’s response to our influence now and in the future remain largely unanswered.

These are the questions Steven Koonin seeks to address in Unsettled: What Climate Science Tells Us, What It Doesn’t, and Why it Matters. His response to the journalists, activists, policymakers, and climate scientists proclaiming that “the science is settled” is a paraphrase of one of Inigo Montoya’s famous lines in the cult classic The Princess Bride, “I do not think ‘The Science’ says what you think it says.” (1)

As former Undersecretary for Science in the U.S. Department of Energy under the Obama administration, Koonin is a far cry from the stereotype of the science-denying, Big-Oil-funded, hard-right climate sceptic. He finds the label “climate denier” aimed at those seeking open scientific discussion “particularly abhorrent” given its allusions to Holocaust denial; the Nazis killed more than two hundred of Koonin’s relatives in Eastern Europe (16). Rather than denying scientific findings, Koonin does the opposite—he exclusively relies on data from the Intergovernmental Panel on Climate Change (IPCC) and other official reports, pointing out where miscommunication and exaggeration have occurred in the journey from the initial scientific studies to the alarming headlines spruiked by the media.

What the science really says

Most of Unsettled deals with common misconceptions about climate change, with several chapters focusing on the most up-to-date research on various climatic extremes. Some surprising facts about climate change that Koonin highlights, drawn directly from research literature and official government or IPCC reports:

How the science gets compromised

So how did The Science repeated in the public square become so mangled that it appears to say the opposite of what the science actually says? Koonin explains how the process of writing IPCC reports does not promote objectivity because, unlike individual scientific studies, the reports and summaries are not rigorously peer reviewed. This leaves them open to corruption at many stages of the process, with authors chosen by governmental officials without regard to conflict of interest constraints, and with lead authors able to simply reject any criticism from reviewers they disagree with. Additionally, the IPCC Summaries for Policymakers are heavily influenced by governments with vested interests in certain policies. The end-product of such processes is misrepresentation of the science:

“It’s clear that media, politicians, and often the assessment reports themselves blatantly misrepresent what the science says about climate and catastrophes. Those failures indict the scientists who write and too-casually review the reports, the reporters who uncritically repeat them, the editors who allow that to happen, the activists and their organizations who fan the fires of alarm, and the experts whose public silence endorses the deception. The constant repetition of these and many other climate fallacies turns them into accepted ‘truths.’” (183)

Koonin is careful to shoot down the idea that he believes in a global conspiracy of climate scientists and world leaders creating a fake environmental emergency. Rather, he believes the widespread misinformation surrounding climate change is a result of a “self-reinforcing alignment of perspectives and interests.” (185) Factors such as the money-making nature of provocative headlines, the desire for certainty amongst the electorate, pressure on scientists to secure grants and the temptation for NGOs to exaggerate the urgency of their cause all contribute to a perfect storm of misinformation and alarmism.

Predictions for the future of climate solutions

Koonin purposefully makes a distinction between the oft-confounded issues of what people could do, what they should do and what they will do. Focusing on the last of these, he posits that “due to strongly growing energy demand driven by demographics and development, the dominance of fossil fuels, and the current drawbacks of low-emissions technologies”, as well as “the uncertainty and vague nature of future climate impacts”, society is most likely to respond to climate change not through restructuring of the energy system, but through adaptation. (210) Koonin is a pragmatist and backs up his prediction by pointing out the distinct lack of progress in large-scale energy system restructuring thus far and the success with which humanity has already adapted to climatic extremes on a local level.

Unsettled does not stop at pointing out the flaws in the way the climate debate has been carried out thus far, but takes the argument an important step further by suggesting practical solutions to restore truth to its rightful place. Though the focus remains on the facts, Koonin concludes the book with his own opinion about what can be done to address the fundamental problems currently rampant in the field of climate science. The solutions include improved observation of the climate system, more thinking on why climate models are not working, more focus on furthering scientific understanding and less on repeating orthodoxy, more interdisciplinary work, and above all, better and less hysterical communication. The most unique suggestion, inspired by military exercises, is the creation of a “Red Team” tasked with “rigorously questioning one of the assessment reports, trying to identify and evaluate its weak spots” in order to catch errors and identify blind spots. (198) He also recommends emissions reductions through the low-hanging fruit of increased efficiency (e.g., stopping methane leaks), more research into geoengineering possibilities and better frameworks for thinking about adaptation.

Unsettled provides a much-needed fact check on the ream of anxiety-inducing climate change media articles and pronouncements by policymakers, climate scientists and activists, which the lay public are bombarded with every day. Steven Koonin firmly believes in restoring the overarching goal of science, i.e., the pursuit of objective facts about the universe, to the climate debate, and this is ultimately what his book aims to do.

Unsettled reminds us of the dangers of cherry-picking data, stripping trends of context and brushing over the fundamental flaws in models in order to achieve a political purpose. The book strikes a good balance between readability and precision when talking about complex ideas and scientific literature, though readers without a scientific background may find it more challenging than those with one. While the many graphs scattered throughout the book provide useful visualisations of the data, full colour printing would have provided more clarity for several figures. Nevertheless, Unsettled represents an undeniably level-headed and accessible analysis of the current state of climate science and presents a valuable contribution to the debate from a well-respected source.