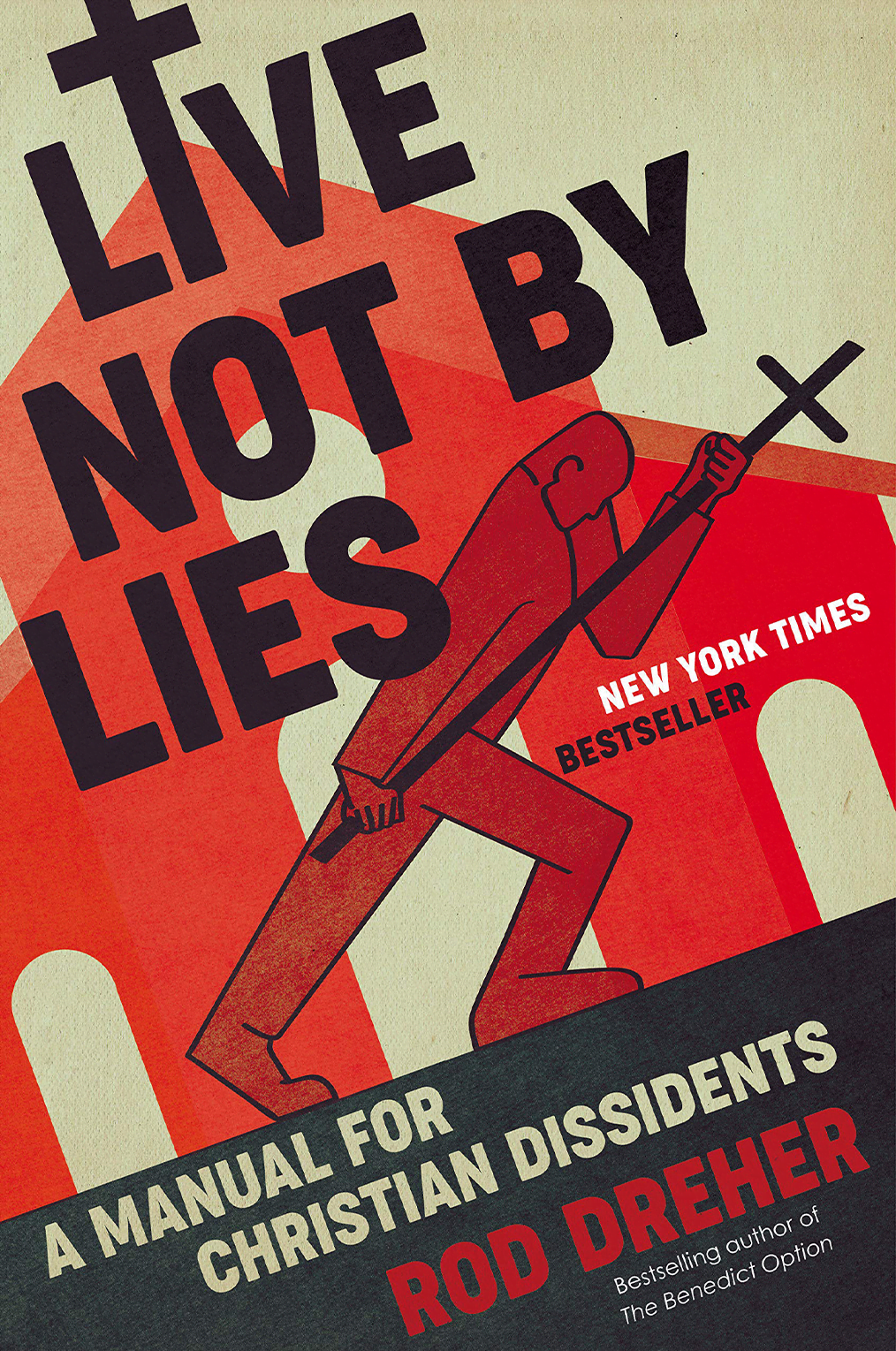 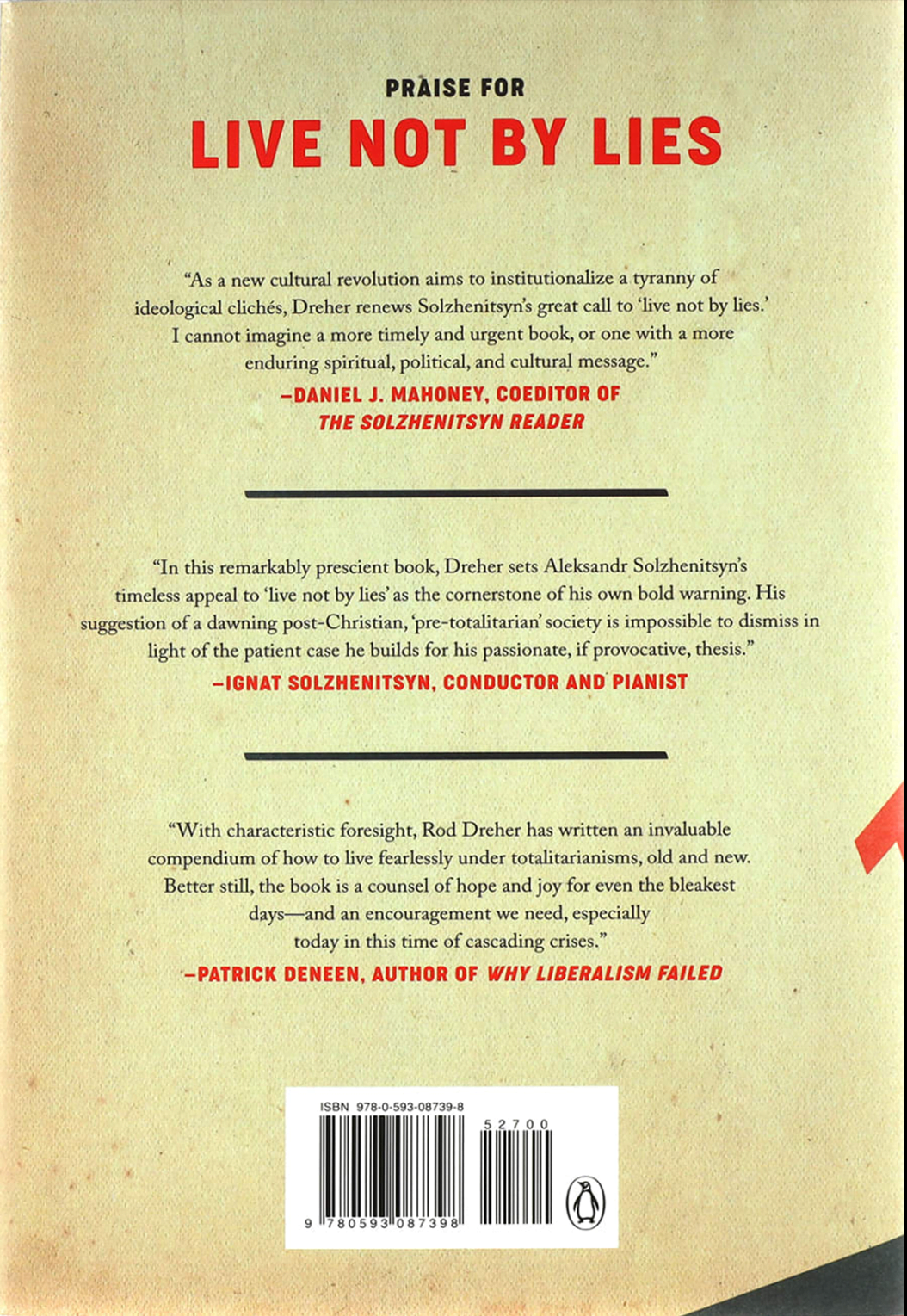 Live Not By Lies: A Manual for Christian Dissidents

“The refugee priest taught the young Slovak believers that every person must be accountable to God for his actions. Freedom is responsibility, he stressed…” See. Judge. Act.” See meant to be awake to realities around you. Judge was a command to discern soberly the meaning of those realities in light of what you know to be true, especially from the teachings for the Christian faith. After you reach a conclusion, then you are to act to resist evil.” [5]

The twentieth century was the century of totalitarianism: communist and fascist. This totalitarianism was hard, backed by the brute power of the state wielding its capacity for violence. We know a lot about it, not so much because it is taught to us in school, but because its survivors have passed their accounts on to us. We know how totalitarianism works: it is “a form of government that combines political authoritarianism with an ideology that seeks to control all aspects of life.” [7] A totalitarian society is one where “an ideology seeks to displace all prior traditions and institutions, with the goal of bringing all aspects of society under control of that ideology.” [7] Dreher contends that a new, soft totalitarianism has emerged. He describes it in this book and, most importantly, offers an inspiring message of hope and resistance.

Traditional totalitarianism – Marxist and fascist – was state-centric in its means of coercion. Fascist and communist governments controlled populations via propaganda, violence, and the threat of violence. It was jackboot totalitarianism that was endured throughout Europe in the twentieth century. Throughout the book Dreher treats the Czechoslovakian experience as paradigmatic of totalitarian control and terror.

Modern Western totalitarianism has little need for such crude forms of control. “Compliance is forced less by the state than by elites who form public opinion, and by private corporations that, thanks to technology, control our lives far more than we would like to admit.” [8] In the technological West there are sophisticated means of surveillance. “The techniques of social control that have become common in China could be adopted by America with relative ease.” [84]

Private corporations increasingly drive much social control. For example, PayPal refuses to offer its services to white supremacist groups, and even though few would find that objectionable, it is also increasingly refusing its services to conservative organisations who hold traditional views on sex and sexuality. [89]

But more than that, a stifling ideology has emerged over the past generation, what Dreher calls “the emerging tyranny of wokeness.” [17] Wokeness is essentially an adaptation of Marxist theory but applied far more broadly than economic conflict.  With wokeness, “our social justice warriors adopt a later Marxist strategy for bringing about social change: marching through the institutions of bourgeois society.” [43] These institutions include schools, universities, the media, and the legislature. Citizens are taught to see Western civilisation solely in terms of its sins, not in terms of its achievements, and traditional ways of thinking about gender and sexuality – universal and global up until a generation ago or less – are derided as unenlightened, oppressive, and harmful. Buzzwords of this ideological movement include “diversity”, and “inclusivity”.

Wokeness also fuels cancel culture, a phenomenon that targets cultural conservatives, mainly Christians: “They are pushed out of the public square, stigmatized, canceled, and demonized as racists, sexists, homophobes, and the like.” [9] With the rise of mega-corporations, increasing university enrollments, and social media, massive portions of the population are subject to workplace and campus rules restricting what they can publicly do and say. Woketivists therefore can trawl social media looking for instances of speech violations and seek to have conservatives’ employment or enrollment at universities terminated.

In our technological, surveillance age, much of the work done to chill speech is by citizen activists and corporate HR departments, not violent governments.

Behind the rise of soft totalitarianism is a psychological, moral shift that has taken place in the West over the past fifty years, but whose roots stretch back around two hundred years. This shift is best captured in Carl Trueman’s Rise and Triumph of the Modern Self. (See Trueman’s interview with John Anderson here).

We have increasingly come to understand the good life in terms of mental health and self-esteem, rather than in terms of doing one’s duty to family, country, and God. It is a shift towards what Dreher, following sociologists, calls “moralistic therapeutic deism”: the belief that “God exists, and wants nothing more from us than to be nice and to be happy.” [12]

Because happiness, mental health, and self-esteem have become the definition of the good life, anything that allegedly undermines them by definition becomes morally pernicious. In our therapeutic age we are witnessing “the irreconcilable conflict between religious liberty and gay rights.” [44] We will continue to see this in the coming years as more speech is deemed to be “harmful” to mental health, particularly traditional, biblical speech regarding gender and sexuality. Restrictions on religious liberty and free speech will not be based on their alleged offensiveness but on their harmfulness as determined by scientific “experts”.

This is therapeutic totalitarianism.

History is the greatest repository of wisdom for any generation. But Dreher says, “Everything about modern society is designed to make memory – historical, social, and cultural – hard to cultivate.” [113] History teaches us what works and what doesn’t, as well as the likely consequences of social experiments. In other words, history is inescapably political.

For this reason certain histories are emphasized in schools, and others are written out. The history of communism and its effects are not emphasized in schools, while the history of fascism, and the triumphs of the desegregation and feminist movements are, for example. Is it any wonder that one authoritative survey carried out in 2019 found that “only 57 per cent of millennials believe that the Declaration of Independence offers a better guarantee of “freedom and equality” than the Communist Manifesto”? [112] The history of Christianity and its contribution to Western civilisation need not even exist. High schoolers and university undergraduates are generally taught nothing about it.

Dreher says we need to create “small fortresses of memory”, based to some extent on the model pioneered by those who endured Czechoslovakian communism: organised home groups and seminars in which stories were told and history was preserved. We need to start and support our own practices and institutions of truth preservation to combat the worst effects of the indoctrination of the mainstream educational institutions and media.

Family as fortress is also crucial for Dreher’s plan of surviving the coming totalitarianism. Conservative families may be good at spotting the woke indoctrination in schools and media, but they also need to be careful about “mindlessly surrendering their children’s minds to smartphones and the internet.” [133]

Central to resisting the new totalitarianism is religion. “The essence of modernity”, says Dreher, “is to deny that there are any transcendent stories, structures, habits, or beliefs to which individuals must submit and that should bind our conduct.” [115] Thus, modernity has made whole populations uniquely susceptible to manipulation by mass media and educational indoctrination, for there is little competition to the narrative of wokeness.

Dreher says, “This is the core of what religion brings to anti-totalitarian resistance: a reason to die – which is to say, a reason to live with whatever suffering the regime throws at you, and not only to live, but to thrive.” [151-152]

Christian family cells of resistance are the most likely to survive and thrive during the coming new totalitarianism, just as they did in the old totalitarianism of communism. They will not only thrive and survive, they will embody the alternative way of thinking and living – grounded in the most noble capacities of human nature – that, over time, people will crave as they become disillusioned with the woke project.

Christian family life will become attractive, and this will be their ultimate act of subversion.

Dreher points out that a “new totalitarianism” has emerged, which is gaining immense ground. Dreher’s book is not a bell of doom, but a trumpet of activism and hope. Live Not By Lies is inspired by the examples set by those living under East European communism, and the wisdom of Aleksandr Solzhenitsyn. We must cease placing our faith in what Dreher calls a “crippling nostalgia for the future” [66], that the West will inevitably overcome because it is the West. Dreher offers a practical way forward that makes no claims to being easy, but is grounded in truth and humanity.