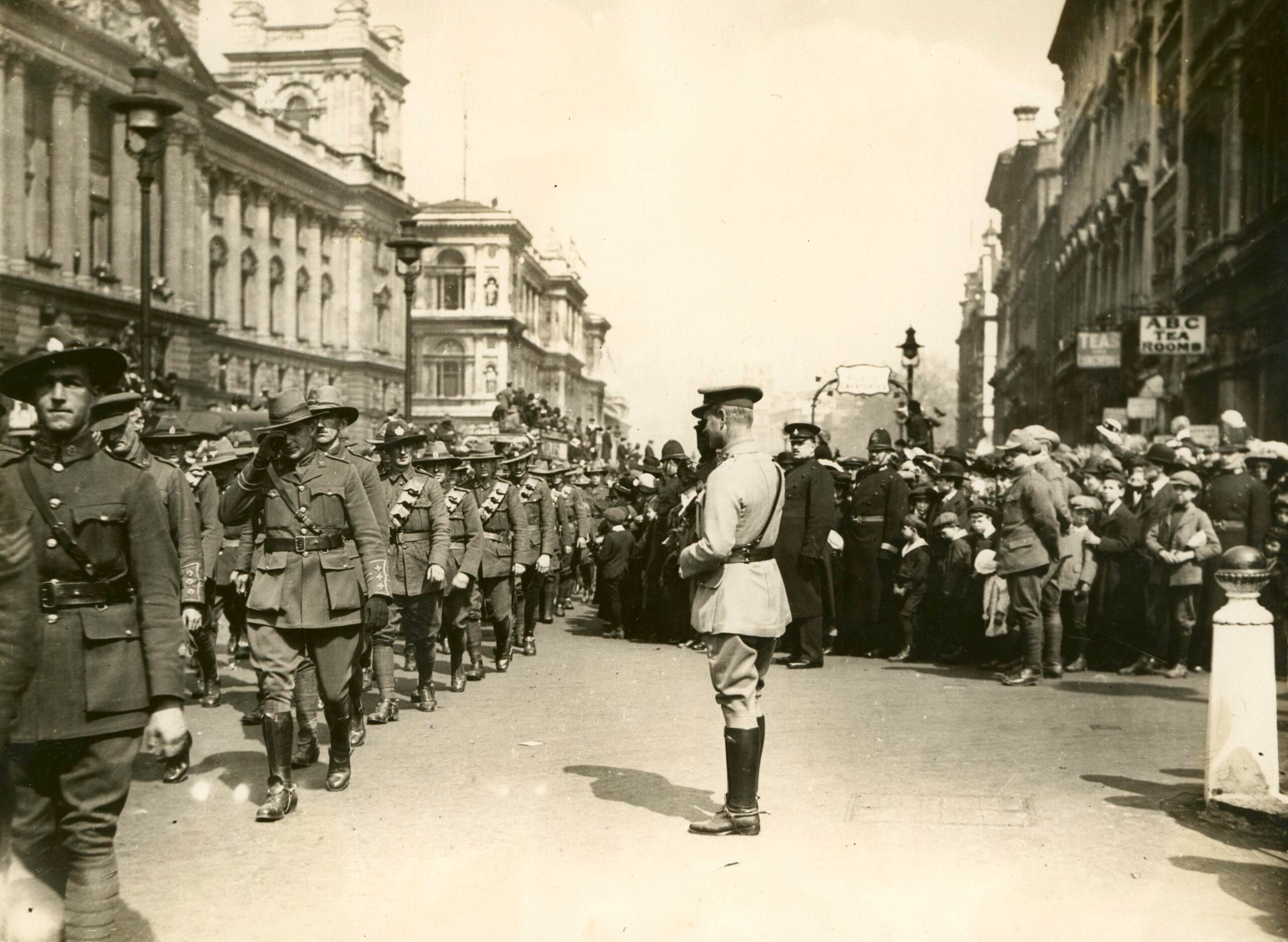 On July 1, 1917, William “Billee” Holmes was killed on the Western Front by a piece of shrapnel passing through his back left ribcage and out through his chest. Witnesses said the shock of the blast was so great that it appeared that Holmes died without pain, even as he was conscious for minutes after the injury. Such was the horror of the Western Front that such a death was judged sweet. Of soldiers in Australian history, the name of General Holmes is uttered daily more than any other. Yet few know much more about his accomplishments beyond the fact the road leading to Sydney airport bears his name. In fact, Holmes may well have been the greatest Australian soldier of his generation, perhaps of all time. At least that may be the impression left on many who read Geoffrey Travers’s engrossing new biography, William Holmes: The Soldiers’ General. Holmes was born in 1862 in Sydney’s Paddington, the son of a non-commissioned officer. He joined the Department of Public Works and then the Water Board, eventually becoming secretary on the latter. He oversaw the maintenance and expansion of Sydney’s water supply and sewerage system, enabling the city’s population to grow from 180,000 to more than 800,000. Holmes had a reputation as one of the most intelligent, competent, and hardworking men in the public service. He married childhood friend Susie Green in 1887. After the devastating loss of their first son at five months old, they went on to have Dorothy and Basil. Basil and his father later served together at Gallipoli and then on the Western Front. The Holmes’s marriage was one of mutual loving devotion, and Holmes was hit hard when Susie died unexpectedly in 1912. At age 12, Holmes had joined the NSW Infantry Regiment as a bugler, and across 25 years he rose to the ranks of captain and acting brigade major. In 1899 the Boer War broke out and all Australian colonies as well as New Zealand enthusiastically offered their troops. Ominously, Australians were eager to prove their worth to the British Empire. Holmes, 37, departed for South Africa to fight as a lieutenant in the NSW Mounted Rifles. He was mentioned in dispatches four times and awarded the Distinguished Service Order. Even in the Boer War Australians noticed the superiority of Australian soldiers to the British. Holmes, not petty by nature, wrote privately about the costly incompetence of some of his British superiors. All of this would play out again in Turkey and become part of Anzac lore. Holmes’s Boer War battlefield experience helped him handle the conditions that came to typify the Great War. Returning to Sydney, Holmes resumed his public service duties and his service in the volunteer military forces. He wanted to implement the lessons he had learned in the Boer War in the training of his men, placing particular importance on rifle shooting. In 1905 he was promoted to lieutenant colonel and appointed to command the 1st Australian Infantry Regiment. In 1912 he was appointed to command the 1st Australian infantry Brigade. When war was declared in 1914 Holmes was given command of the Australian Naval and Military Expeditionary Force, which was tasked with occupying the German colonies in New Guinea and the Pacific and destroying the wireless stations that serviced Germany’s East Asian fleet. Travers suggests that had Holmes not successfully and quickly occupied German New Guinea, the Japanese would have, which would have given them a stepping stone to Australia during World War II. Returning from New Guinea, Holmes was appointed to command the 5th Brigade of the Australian Imperial Force, which he took to Egypt and then Gallipoli. Writing home, Holmes revealed the general opinion was that the whole Gallipoli campaign was ill-conceived, but he considered that the Australian soldier had created military history in the landing and in the evacuation of the place. During the Boer War Holmes had learned the appalling futility of sending men to charge at modern rifle and machinegun fire, something for which he had no patience. On May 2, 1915, the less experienced John Monash sent troops charging into fire; more than half of them were immediately cut down.

After Gallipoli Holmes was sent to the main theatre of war on the Western Front, where he always wanted to be. Here, like millions of others, he experienced the sheer brutality, inhumanity and seeming futility of war.

He led the 5th Brigade throughout 1916, and during the Battle of the Somme between July and December of that year he consolidated his fighting reputation. Holmes was appointed commander of the 4th Division in December 1916. Along with Monash and Talbot Hobbs, Holmes was one of the first three Australian citizen soldiers to successfully command a division.

Holmes commanded the 4th Division through the battles of Bullecourt and Messines in 1917.

Holmes was famous for going to the frontline during a battle to ascertain the situation for himself. He believed that, at critical times, reconnaissance should be conducted by officers in command who held the power to make decisions and could therefore make a difference. This was especially so when news was difficult to obtain. Many, including the great war historian and correspondent CEW Bean, noticed this habit and believed it singled Holmes out as uniquely courageous and humane among leaders. In fact, Holmes was one of the generals most loved by his troops, mainly owing to his courage on the field. Monash, by contrast, preferred to remain at his headquarters, rarely, if ever, venturing to the frontline. On hearing of Holmes’s death, Bean wrote: “I have never done Holmes justice … Holmes is the first Australian commander. He had the power of command which Hobbs and Monash have not.” In stark contrast to Monash, according to Bean, Holmes was “a thousand times too proud” to indulge in self-promotion. Notwithstanding the brilliance of Monash, it is hard to resist one biographer’s conclusion that Monash “perhaps won more than his fair share of fame”. Travers proves that Holmes has not received anything near his fair share of fame. Travers’s biography is meticulously researched and written with sympathy and eloquence. Many of Holmes’s contemporaries believed that as a soldier he was without peer. Travers vindicates their opinion. Is it not time for us as a nation to honour General William Holmes accordingly?